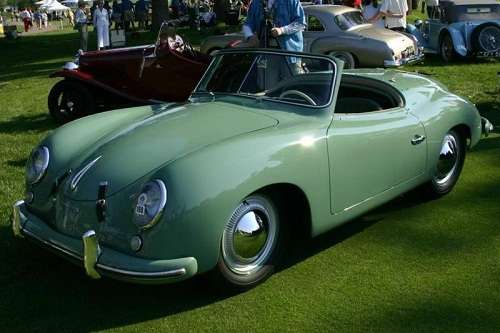 Porsche Cars North America and Mazda Raceway Laguna Seca are planning Porsche's Rennsport Reunion IV at the track in California Oct. 14-16. Rennsport Reunion IV is expected to be a landmark event that collects Porsche vintage and current race cars and the drivers who made them great in one place.
Advertisement

It will be a program of on-track competition, complemented by a concours d’elegance and activities that celebrate the rich history of Porsche 911 race cars.

The event made its debut in 2001 and has been held three times, every time until now on the East Coast.

“While the Rennsport name has become a staple fixture for international collectors and racers over the past 10 years, choosing the Monterey Peninsula will open up this one-of-a-kind gathering to the many Porsche fans in California and beyond who were previously unable to attend,” said Detlev von Platen, Porsche president

“Now they’ll have the opportunity to see, feel and hear from up close hundreds of famous Porsche race cars and dozens of their drivers from past and present during a truly memorable weekend dedicated to Porsche’s motorsport heritage.”

“This will truly be a rare gathering of significant Porsche race cars on the West Coast,” said Gill Campbell, general manager of Laguna Seca. “Porsche has a long racing tradition in Monterey and we look forward to celebrating its heritage in a befitting manner for everyone to enjoy.”

Ticket information about Rennsport is available by calling 1-800-327-7322. To purchase tickets to the Porsche Race Car Classic, go to porscheracecarclassic.com.