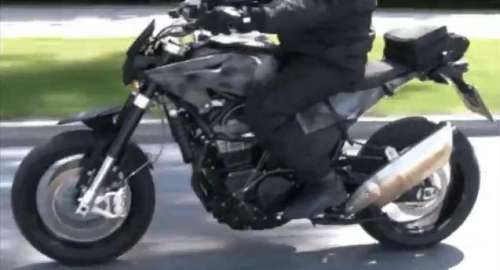 This video was shot by an enthusiast in the streets of Italy of the new Husqvarna 900 street prototype. This bike is more important than itself. It truly represents the direction BMW wants to take with the brand as a whole.
Advertisement

The 900 street model is huge for the company as it is the first road-going bike produced by Husqvarna (Hoosk-Varna). Now that BMW owns the company, replete with deep pockets to fund projects, everyone is interested to see what the results are going to be.

Husqvarna has always been a loved brand. In the 70's and 80's, it was essentially the only brand in Europe and the United States that could beat the Japanese in the off-road market (not necessarily in sales, but in competition.)

We've seen big changes. Starting out as a Swedish company, and eventually being sold to the Italians, who in turn sold it to the Germans. BMW is now in charge, and as stated earlier, is a good thing. BMW has been desperately wanting to get into the off-road market. Their attempts have been decent, but nowhere near where they wanted to be. Buying Husqvarna has given them a full line off-road brand.

All eyes are on this particular bike because it will truly give us a glimpse of where BMW wants to take Husqvarna. With BMW locking down the adventure market with its famous 1200GS and 800GS, the road market with several bikes including a inline six touring bike and of course the sport market with the S1000RR which is the undisputed king of the 1000 power wars, the only hole in the complete lineup would be the supermoto and dirt offerings. The Husqvarna 900 here is clearly a large supermoto oriented bike.

This surely won't be the only road-going model for Husqvarna. I see BMW using the brand as an entry into the more upscale BMW's. Possibly a brand that could compete with the Japanese in terms of price and performance. It would be a risk taker, so BMW wouldn't have to bear any brunt of the backlash that could occur from said risks.

While there are already plenty of competitors for this new Husqvarna motorcycle on the market today, I'm still dying to see what effect it will have on the brand and on BMW. Look for the bike to be officially released later this year at the EICMA bike show.