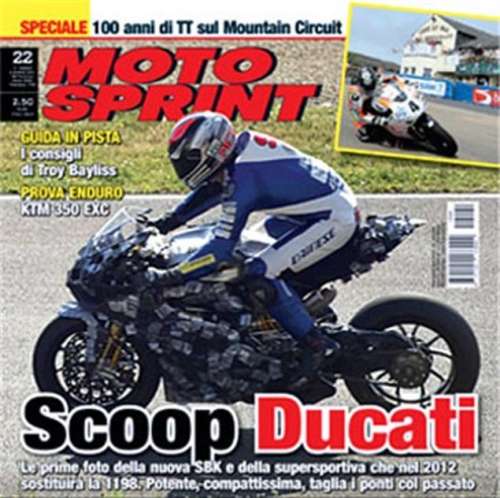 The first spy shot of the 2012 Ducati Super Quadrata has been shown off today by Italian magazine Moto Sprint. If the rumors are correct, the new motorcycle from Ducati will be a completely radical departure from what super bikes from the Italian manufacturer have been.
Advertisement

There have been revolutionary changes in Ducati's lineup in the past five years. New models that would never have been associated with the brand have been built and have sold fantastically. Yet with their super bikes, the changes have been evolutionary, rather than revolutionary. Which is a bit strange considering super bikes are what Ducati is known for.

Much like Harley Davidson, Ducati is rooted in tradition. Ducati's super bikes have quirks that give them personality, but as the years pass, they become harder and harder to move away from, even if it's for the better. The traditional aspects of Ducati super bikes have generally been steel, trellis frames, dry clutches and v-twin engines (don't bother me with this L-Twin business.) The few and vocal voices have shouted at Ducati to not change things, and for a while, Ducati listened.

As we all know, especially in the cut-throat world of super bikes which are constantly evolving and improving, if you stay still for too long, you will fall way behind. Ducati has tried for years to work with its traditions to improve the motorcycle, but with new and shockingly powerful bikes like the BMW S1000RR and the Aprilia RSV4 putting out incredible power from their engines, Ducati felt that it could no longer compete with the platform they had.

Realizing this, big changes are ahead for Ducati's flagship motorcycle as one or more of the traditional components will be gone. The lack of a steel trellis frame is the biggest and most obvious. The new bike will use the engine as the frame, and use carbon fiber spars to bolt the front suspension and rear sub frame to.

The pictures reveal a heavily disguised body ridden during testing at the Mugello racetrack in Italy. Few details can be shown from the photograph. But with the patents filed by Ducati for a frame-less motorcycle and the interesting position of the rear shock (shown in front of the riders left shin) in this photo, it looks like big changes are coming.

Source: May 2011 issue of Moto Sprint via AsphaltandRubber.com