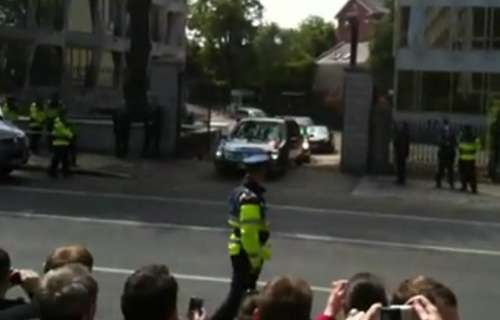 A wedge on the exit of the American Embassy in Ireland exit defeated Obama's almighty Cadillac, rendering it completely stuck. All this in view of hundreds of excited onlookers.
Advertisement

Imagine yourself going over a tall speed bump in your low-rider. So tall in fact, that once your front wheels get over it, the frame of your car touches the top of the hump and you've in essence created a see-saw. This is exactly what happened to our President this morning

President Obama's Cadillac, affectionately named "The Beast" by its owner, was built to order by General Motors for the Secret Service when Obama was elected. It is designed to get the President from point A to point B in 100% safety.

This eight ton beast, (the equivalent of three Ford F250 trucks!) is so heavy, they had to use the chassis from a GMC TopKick commercial truck. The standard Cadillac 4.6 liter V8 would never be able to move around that much heft, so Cadillac installed the GM 6.6 liter Duramax turbo-diesel V8 to haul the "Beast" around.

Why so much weight? well the Caddy is equipped with just about every safety device that can conceivably be installed into a vehicle.

This impressive list includes:
1.) Armored fuel tank with internal foam that would prevent an explosion even with a direct hit
2.) The trunk holds an oxygen tank that would supply oxygen to the president in case of a chemical attack and has a fire extinguishing system in case of a fire bomb
3.) Eight inch thick armored doors
4.) Five inch thick armored floors
5.) Kevlar and steel reinforced tires that allow the car to be run even if the tires are blasted away
6.) Five inch thick bullet proof glass

All this defense was no match for a bump in the road. Maybe what Obama's Cadillac really needs is a 6-inch lift kit with some 35" tires. Which might help garner some cool-votes for his re election here in the South.

Keith Griffin wrote on May 23, 2011 - 2:08pm Permalink
Wow - what a major lapse in security. The only thing the article doesn't explain is how it finally got free. And, great idea on the suspension. Range Rovers have adjustable suspensions, why not The Beast? Great story.
Cadillac Dealer... wrote on June 16, 2011 - 4:28pm Permalink
Wow, so much money spent on Kevlar and this car can withstand bombs but not pass over a curb? That's kind of embarrassing. Yea, car needs to be raised up.
jonathan o ebhota wrote on October 22, 2012 - 6:33pm Permalink
A proof of man's imperfection. We cant be winners all the time but life goes on.
Goober wrote on July 10, 2011 - 8:17pm Permalink
Any (much maligned by the media) southern country boy could fix that with a $100.00 lift kit. What a design failure - epic.
elaine, duh! wrote on August 25, 2011 - 7:51am Permalink
happy birthday etc