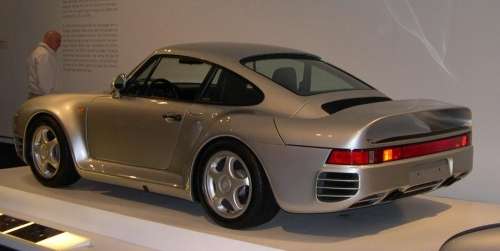 Cars you should know: Porsche 959

Development started in 1981 when Porsche decided to figure out to what extremes they could take the 911 design. Everyone, including Porsche, knew that other than placing it on the roof, the trunk of the car is the worst place to put an engine. Now, however, they were going to try to tame the beast.

You see, prior to that time, if a 911 even caught whiff of a corner, it would slide off the road, crash into a church and explode in a cloud of fire and smoke. The 959 would completely change that.

At the time, the 959 was far and beyond the most technically advanced car on the planet. Even though it is 25 years old, it is still more advanced than many new cars sold today. The list of technological gadgetry is astonishing.

The Porsche 959 is known for a few things. First is an extremely advanced, computerized four wheel drive system that constantly monitored which wheels had the most traction and sent the power there. There is so much wizardry in that system that not even Harry Potter himself knows how it works. All we know is that the system allowed the 959 to go around corners better than any 911 at the time could dream of.

Secondly was that the 959's body shape was determined by aerodynamic efficiency, every bump and curve and vent was specifically designed to reduce the parasitic effect of the wind. It even had a ride height system which raised and lowered the car depending on the speed to further reduce drag. The body was further enhanced by being made out of aluminum and Kevlar in order to keep weight down.

Third was that tiny little flat six of only 2.8 liters which made a mind crushing 444hp (Twin turbo chargers helped a little.) It was more powerful than just about any other production engine of its time.

Despite all this, the car retained all the creature comforts that the other super cars didn't have. These features included: air conditioning, electric everything, a comfortable seat that didn't turn your bones into gravel, a softer suspension to keep you from breaking your teeth every time you went over a painted line on the road and a level of build quality that meant you could drive it to your corner store AND make it back.