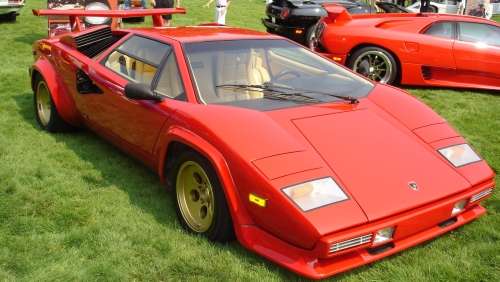 Cars you should know: Lamborghini Countach

There is nothing, and I mean absolutely nothing that could prepare the automotive world for the Lamborghini Countach. This car single-handedly punched every other super car in its face and stole its girlfriend.
Advertisement

The Lamborghini's distinct looks have gone unmatched in all of car history. No other car before or after the Countach has been able to rival its outlandishness and cement itself into the minds and souls of every teenage boy on the planet.
In the 80's there were two posters on your wall. One was of Kelly LeBrock from "Weird Science" and the other was a Lamborghini Countach, that's it.

It was styled by a young designer named Marcello Gandini who could've cared less about any of the practical things you expect from a car. There was no trunk space, none. There was barely room for a normal sized human inside, and even if you were small enough to fit, you probably weren't strong enough to operate the controls. The rear window was so small that in order to reverse, you would have to quite literally open the scissor doors, sit half inside and half outside and then proceed to back up while looking over your right shoulder. The car was absolute insanity on wheels.

In evolutionary terms, all the other cars before it were single celled amoebas. The Countach, however, was the Saturn V Rocket. Even though the design was nine years old when the first Star Wars premiered, it made every vehicle in that movie look antique.

Despite its extraordinarily long production life, the Countach always stayed with the times. Just as the world started to get accustomed to the Countach, Lamborghini would make it even more ridiculous. As the years passed, wings were added, then more flares. Of course, bigger and bigger engines were introduced. Because if there is one thing that the Countach was designed to do, it was to go fast, and boy did it succeed in doing just that.
I'm not going to bore you with details about engine specifics or tire sizes, or any of that stuff. Nobody loved Marilyn Monroe for her 8th grade Algebra test scores. The reason that the Countach is famous is not because of what it could do on the road, but because it is everything a 10 year old boy could ever imagine, minus the machine guns of course.