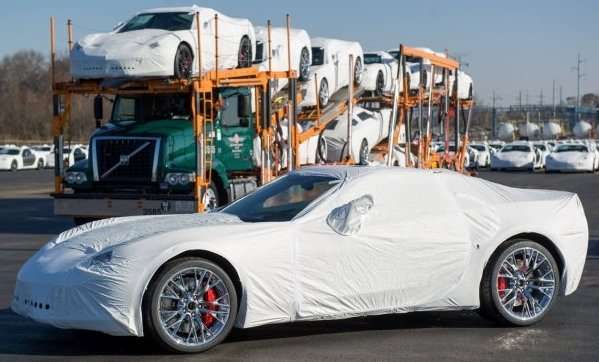 If you were one of the people who put money down on the 2015 Chevrolet Corvette Z06 when the order banks opened earlier this year, you could have your 650hp American supercar by the end of this week – as the first Z06 coupes to roll off of the Bowling Green assembly line began reaching owners yesterday.
Advertisement

The 2015 Chevrolet Corvette Z06 is billed as the most track capable Corvette of all time and with a claim like that comes a great deal of anticipation and consumer interest. That early consumer interest drove a great many prospective buyers to their local dealerships to place an order for the newest super-Vette and with those early orders came just as much anticipation by those folks who have already made a space in their garage for the 2015 Z06. Well, the wait officially ended yesterday, as GM began shipping the first examples of the 2015 Corvette Z06 coupe along with delivering the very first Z06 to auction-buyer Rick Hendrick.

"It has been an incredible opportunity to work on Chevy's most capable model," said Jeff Lamarche, manager of Chevy's Bowling Green Assembly plant. "It truly is an amazing car, and we're thrilled to get them into the hands of our eager customers."

2015 Corvette Z06 VIN #1
The very first 2015 Chevrolet Corvette Z06 coupe to be built was auctioned off a few months back and as was the case with the first 2014 Corvette Stingray coupe and the first 2014 Corvette Stingray convertible, the first C7 Z06 to roll off of the assembly line was destined for the garage of NASCAR team owner Rick Hendrick. Hendrick paid a cool million dollars for the right to own Z06 VIN #1 and he was on hand to take delivery of the 650hp coupe yesterday at the National Corvette Museum in Kentucky.

As has been the case with all of his VIN #1 C7 Corvettes, Z06 #1 was painted black, but in addition to picking up his black Z06 coupe at the Corvette Museum, he also took delivery of 2015 Corvette Z06 coupe #3. This silver supercar will be Rick Hendrick’s driver, while the #1 VIN Z06 will go into his sprawling collection.

GM Expects More to Be Delivered by the Weekend
As you can see in the video below from the National Corvette Museum Facebook page, Rick Hendrick’s two new Corvette Z06 coupes were among a lineup of cars waiting patiently to be picked up as part of the museum delivery program. In addition to those cars being picked up by the new owners in Kentucky, the first shipments of Corvette Z06 coupes headed for dealerships left the Bowling Green plant yesterday and according to the automaker, the folks who preordered those first units could have them before the end of this week.