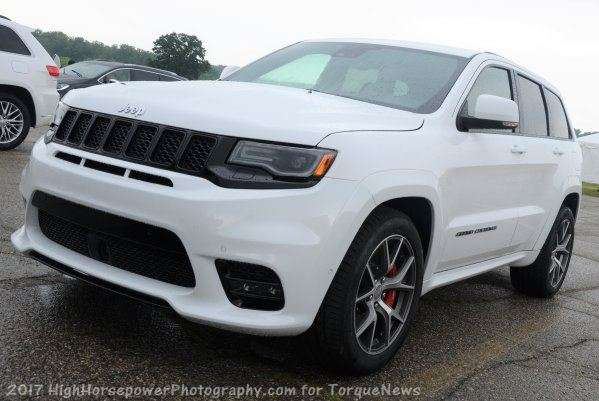 What to Expect at the Hellcat Jeep Debut in New York

We know that a new Jeep Grand Cherokee with some variation of the Hellcat Hemi will debut next month at the New York International Auto Show, but with little official information on this new high performance SUV – here is a quick look at what we might see when the vehicle expected to be called the Trackhawk debuts in the Big Apple.
Advertisement

During the 2015 Detroit Auto Show, Jeep brand CEO Mike Manley confirmed that there would be a Jeep Grand Cherokee packing the supercharged Hellcat Hemi by the end of 2017. Manley then confirmed at the media launch of the new Jeep Compass that the Hellcat-powered Grand Cherokee would make its grand debut at the 2017 New York Auto Show, but other than that, there has been no official information on the vehicle rumored to be called the Trackhawk.

In fact, the company hasn’t even officially used the Trackhawk name when discussing a Hellcat-powered Jeep, but with that name being trademarked a while back, that has been the name associated with a supercharged Grand Cherokee over the past two years of speculation.

In any case, as we are just over a month away from the start of the New York Auto Show, this seems like a fine time to discuss what the Big Apple debut of the Hellcat-powered Jeep Grand Cherokee will look like.

Hellcat Package on a Jeep
When the Hellcat-powered Jeep Grand Cherokee arrives – whether it is named the Trackhawk or something else – it will serve as the premium performance option above the current Grand Cherokee SRT with the 392 cubic inch Hemi. We can expect that the current SRT Jeep with 475 horsepower will continue to be offered alongside the Hellcat model in a similar form to the way that the Challenger and Charger each have a 392 model and a Hellcat model.

As we all know, the Hellcat Hemi in the Challenger and Charger delivers official figures of 707 horsepower and 650lb-ft of torque, but there is no guarantee that the supercharged Jeep will have those same ratings. Keep in mind that the Dodge Hellcat cars are rear wheel drive while the Jeep will almost surely be all-wheel drive, so there could be a reduction in power to help preserve the life of the AWD bits in the Jeep. Even if Jeep backs the power down from the 707/650 in the Dodge cars, this will still be one of the most powerful SUVs in the world. That power will likely be sent to the wheels by means of an advanced all-wheel drive system and a new heavier duty 8-speed automatic transmission, which should help the Hellcat Jeep transfer more power to the wheels in a more reliable fashion.

Next, like the Challenger and Charger, the Hellcat Jeep will likely come with an advanced, adaptive suspension system and a monster Brembo braking package to help this big sport ute corner and stop just as well as it launches. Like the current SRT Jeep, the Hellcat version should include a handful of drive modes to allow the vehicle to shine in all of the key areas, but it will be interesting to see how the drive modes differ for the Hellcat model compared to the current Grand Cherokee SRT. There will almost certainly be a mode to help the Hellcat Jeep move out as quickly as possible in a straight line and I would guess that there won’t be any provision for off-roading with the Trackhawk, but I could be wrong. It is still a Jeep, after all.

We can almost guarantee that the Trackhawk Jeep will have a premium cabin layout, with leather, heated, cooled and power adjustable front seats, the newest UConnect infotainment system with the Performance Pages program, a sporty steering wheel with paddle shifters, an advanced driver information center with a reconfigurable layout and a booming sound system. In short, the Trackhawk will likely have the most well-appointed interior of any Grand Cherokee, following the trends set by the SRT 392 Jeep on sale today.

Finally, the Trackhawk Jeep Grand Cherokee will likely have a unique exterior design which will make it perform better and stand out in a crowd. The Hellcat Challenger and Charger each get a unique hood, unique wheels, a package-specific front fascia (which is more prominent with the Challenger) and a unique rear diffuser – along with Hellcat badging all around. The Hellcat Jeep will have a hood that brings in as much fresh air as possible and moves out as much engine bay heat as possible, with a front fascia that feeds gobs of air to the engine bay and the front brakes.

Since the Trackhawk could be one of the quickest and fastest SUVs in the world, I would expect it to have the most aggressive front fascia that we have seen on any modern Jeep, as the engineers will want to make sure that they direct as much air over the vehicle as possible. There will likely be a special aerodynamic treatment out back as well, along with a set of big exhaust tips.

Finally, there have been rumors that the Trackhawk will have dramatic styling cues which separate it from the SRT 392 Grand Cherokee. Should that prove to be true, I would expect something like widened wheel arches, which would allow for wider wheels and tires. In any case, we know that the Hellcat Jeep will have far more aggressive and functional styling than the “older” SRT Jeep shown above.

Keep in mind that this is all speculation, based mostly on the differences between the 392 and Hellcat versions of the Challenger or Charger, but I believe that many of the upgrades for the Dodge muscle cars will apply to the Grand Cherokee as well.