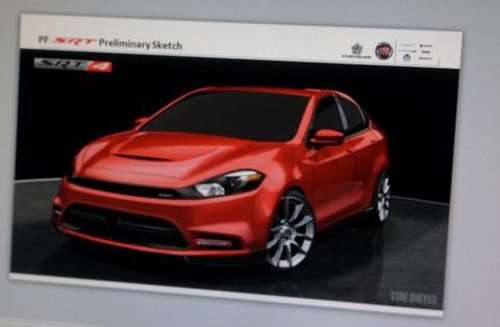 What appears to be the Dodge Dart SRT4 surfaces online

It is well known that the Chrysler Group will soon unveil the high performance Dodge Dart SRT4 but the company has done a fine job of making sure that no one gets a look at the new high performance compact sedan – until the image on the right surfaced online this week – showing what could be our first look at the SRT variant of the sporty Dodge Dart.
Advertisement

Literally nothing is known about the 2014 Dodge Dart SRT4 including whether or not the company will include the “4” in the name as some believe that it could just be called the Dart SRT. However, should this grainy image shown above on the right (which was first posted online by the folks at OntarioStreetCar.com) be a legitimate company image – we could know both the name and what the front end of the high performance compact sedan will look like when it arrives later this year.

As you can see in the image, this rendering of what many believe to be the 2014 Dodge Dart SRT4 looks like many other company sketches including official looking branding in the top right hand corner and an artist’s watermark in the bottom right hand corner. The name reads Tim Doyle and Mr. Doyle has been involved with penning preliminary artwork for the Chrysler Group in the past with some of those models becoming show vehicles including the Dodge Durango Black & Tan from the 2010 SEMA Show.

In terms of vehicle details, this dark, grainy image hides some of the attributes of the possible Dart SRT4 but with some adjustments to the brightness and contrast of the artwork, we can bring some other features into detail. First, while some believe that this Dart SRT4 has done away with the crosshair grille treatment that is found on all of the current Dodge products shy of the Challenger, the familiar grille has been moved from the upper fascia opening to the lower opening and enlarged a great seal – an aspect which would likely make plenty of room for engine intake air and to provide proper cooling for a high performance turbocharged engine. Upon further inspection of our altered image of the Dart SRT4, it appears as though this car has contrasting black side sills and some sort of splitter or chin spoiler mounted at the bottom of the front fascia. Our gallery on the right contains the edited version of the Dart SRT4 image with these possible unique body bits outlined in white – along with the crosshair grille being more visible. Click the thumbnails to see the larger version.

What is clear from this image of what believe could be the Dodge Dart SRT4 is a hood with a deep central air extractor (somewhat similar to that found on the Charger SRT8) and fog light housings that could be filled with black cladding or these fog lights could also be “floating” in a cooling duct for the engine or the braking system. We can also see a set of large 10 spoke rims that fill the wheel wells very nicely but beyond those wheels – the rest is really just speculation.

Based on what we can see here, there is no reason why the car shown here couldn’t be the Dodge Dart SRT4. While this could be something as simple as an early rendering that just snuck out and the actual production model SRT4 could look vastly different when it arrives – this is the first piece of documentation that appears to be a legitimate view of the high performance Dart SRT4.

Unfortunately, with no official word from the Chrysler Group as to when the high performance Dart SRT4 could arrive, there is no telling when we might get our first actual look at the high performance compact sedan but when it arrives – we fully expect the high end Dart to take the sport compact world by storm.

oknahs wrote on November 5, 2013 - 10:07am Permalink
I have a new optima sx turbo with paddle shifters and its a blast to drive. If the dart had a similar 2 liter turbo pushing close to 300 hp it would be a monster. I had a test drive in a veloster turbo and its a mean one for sure with a little over 200 hp.

Tesla Contemplates A New Strategy for China Retail even As Sales Boom
Jay Leno on Elon Musk & EVs: “I Think He Should Get ... Credit"
END_OF_DOCUMENT_TOKEN_TO_BE_REPLACED