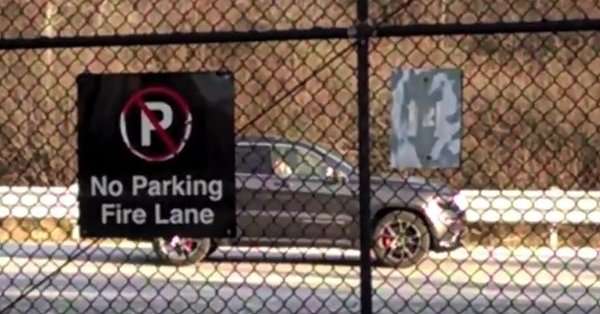 A videographer who was poking around one of the Chrysler Group test facilities captured footage of what is clearly a Hellcat Jeep Grand Cherokee test vehicle – giving us a chance to see and hear the supercharged SUV as it launches hard from a stop.
Advertisement

We have been speculating for months about the possibility of a Jeep Grand Cherokee powered by the incredible Hellcat Hemi and when Jeep brand boss Mike Manley confirmed at the 2016 North American International Auto Show that there will be a Hellcat Jeep by the end of 2017 – all of the speculation was put to rest. For the first time, we had official word that the Hellcat Jeep would become a reality and following that announcement comes our first look at what will surely be the most powerful sport utility vehicle in the world.

First Hellcat Jeep Video
This video of what is most likely a Hellcat Jeep Grand Cherokee test mule was captured by the auto paparazzi at Chris Doane Automotive and posted on YouTube by the folks at Left Lane News, although a variety of other outlets have also posted the video on their own sites.

When the video first begins, we are seemingly staring at a track of some sort behind a large gate and nothing is really happening. After a few seconds, we hear tires chirping and an engine revving, accompanied by the unmistakable whine of a supercharger. If you have any experience with the Hellcat cars, you might quickly think “that sounds like a Hellcat car”, but when the vehicle appears from behind the trees, it is a Jeep Grand Cherokee.

The Jeep doesn’t go very far, perhaps lifting when the driver saw someone filming from outside of the gates, but as it quickly lurches to a stop, we are left feeling like this is the first ever video footage of the Hellcat Grand Cherokee in action.

Yes, the “action” is pretty mild, but from the short blast on the track, there is little question that this is a supercharged Jeep Grand Cherokee and if there is a supercharged Jeep being tested – it is almost certainly the Hellcat Hemi under the hood. Also, this Jeep clearly has the SRT wheels and brakes, so every indication suggests that this indeed a Hellcat Jeep test vehicle.

Fortunately, anyone who has driven a Hellcat Challenger or Charger knows how easily they will spin the tires during a hard launch. This Jeep Grand Cherokee obviously launches hard, but there is just a small bit of tire squealing and when it comes into sight – there is no smoke coming from the back end. A launch like this with a Challenger would almost surely create some tire smoke, but the Jeep seems to have moved out with very little traction loss. Based on that, I believe that this Hellcat Jeep is four wheel drive – just like the production models should be when they arrive sometime in 2017.

In the meantime, crank up your speakers and enjoy the roar of the Hellcat Jeep Grand Cherokee.

Image above is captured from the Left Lane News video included here.