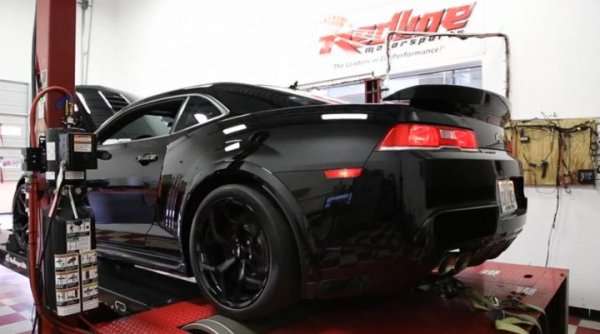 The new Chevrolet Camaro Z/28 is touted by GM as the most track capable Camaro of all time with an LS7 engine packing over 500 horsepower and thanks to the folks at Redline Motorsports – we have our first look at this monster muscle car in action on the dyno.
Advertisement

Any time that an automaker reveals a new high performance vehicle, everyone wants to know how much power the engine makes, but when the Chevrolet Camaro Z/28 was introduced with the same LS7 engine as the C6 Corvette Z06, we all figured that we knew how much it would make. In Corvette duty, this 7.0L naturally aspirated mill made 505 horsepower and 470lb-ft of torque. Those are pretty solid figures – especially in the Camaro Z/28 that has been stripped down to only the bare essentials – so it came as a surprise when it was announced that the LS7 in the Z/28 would pack the same horsepower but an addition 11lb-ft of torque. So officially, the Chevrolet Camaro Z/28 has 505 horsepower and 481lb-ft of torque, but as is the case with any performance car, we all want to know how much power the super-Camaro puts to the ground.

Well, the good people at Redline Motorsports in Pompano Beach Florida got their hands on a new Chevrolet Camaro Z/28 and they strapped it to their Land & Sea DYNOmite dynamometer to see how much this car puts to the ground in bone stock form. Best of all, they made a video of the run, giving us our first chance to see and hear the most track capable of all time as it cleared its lungs on the dyno.

Predictably, the Chevrolet Camaro Z/28 sounds freakin’ awesome as it rolls gently through the gears and as it climbs through the revs on a hard pull. Living in Milford, very near the GM Proving Grounds, Ive heard more than a few Z/28 test cars driving around this area, but this is the first time Ive heard one roar at wide open throttle…and its impressive to say the least.

What is even more impressive is that fact that the Redline Motorsports dyno measured 455 rear wheel horsepower and 420lb-ft of rear wheel torque. When you consider the advertised numbers of 505 horsepower and 481lb-ft of torque, the Z/28 is surprisingly efficient in putting the power to the ground. Most rear wheel drive vehicles have a drivetrain loss between the engine and the ground of roughly 15%, but the new Z/28 loses only 10% of the horsepower and 13% of the torque. That means one of two things – either the new Camaro Z/28 is incredibly efficient or the stated horsepower is a little low. In any case, 455 and 420 at the wheels are very good numbers so shy of the Camaro ZL1 and the Ford Mustang Shelby GT500, the new Z/28 is one of the most powerful muscle cars of all time in addition to being the most track capable.