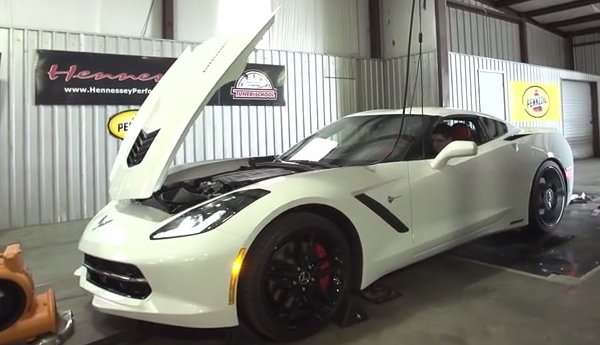 Watch a 1,000hp Hennessey Corvette Scream on the Dyno (Video)

The folks at Hennessey Performance have just offered up a video of their first 2015 Corvette HPE1000 build, showing the 1,000 horsepower Stingray getting a light workout on the dyno.
Advertisement

Shortly after the new C7 Corvette was introduced for the 2014 model year, the high performance experts at Hennessey Performance Equipment rolled out their HPE1000 package, which lifts the output of the Stingray from 460 horsepower to 1,000 horsepower. Hennessey recently built their first 2015 HPE1000 Corvette Stingray and the Texas tuner made a short video that lets us see and hear the 1,000 horsepower C7 while in action on the rollers.

The HPE1000 C7 Stingray
Oddly, the HPE1000 kit for the 2015 Chevrolet Corvette Stingray isn’t current listed on the Hennessey website, but we have talked about it before here on TorqueNews, so we know what makes this beast roar. Like the gentleman in the video states, this Corvette has a built engine, which includes forged internals, a custom camshaft, high performance cylinder heads and a high flow exhaust system, although it is unclear whether this engine retains the same 6.2L displacement as a stock C7 Stingray or if the engine has been bored or stroked.

In any case, the HPE1000 package also includes a Hennessey supercharger setup, a HPE high flow exhaust system and all of the fuel system components needed to feed this high powered engine. The result of these additions to the 2015 Corvette is a C7 Stingray that packs a whopping 1,000 horsepower at the engine, but the folks at Hennessey wanted to see what this incredible custom supercar actually puts to the ground.

The Dyno Run
This was the first 2015 Corvette Stingray HPE1000 so it was the first to hit the dyno, but the gentleman walking us through the video tells us that he expects around 850 wheel horsepower. After letting us see and hear a dyno blast from the front and rear of the Corvette, the camera cuts away to a slowly zooming view of the dyno sheet – showing wheel power figured of 846.99 horsepower and 719.82lb-ft of torque. Assuming the average 15% drivetrain loss with a rear drive vehicle, this HPE1000 Corvette is right in the proper ballpark of 1,000 horsepower at the engine.

The only real bad news about this package is that it cost $67,950, and that doesn’t include the 2015 Chevrolet Corvette Stingray that you need to build the HPE1000. Buying the least expensive 2015 Corvette possible will run you right around $56,000, so when you add in the $67,950 HPE1000 package, the final cost of the car would be around $124,000. That is a whole lot of money, but when you consider the fact that you would have one of the most powerful cars on the road – anywhere in the world - $124k really doesn’t seem all that bad.

So if you have a 2015 Corvette, you have an extra $68k laying around and you want to have 1,000 bhp, make the call to Hennessey Performance to set up your build. For the rest of you out there, crank up your speakers and enjoy the roar of 1,000 American horsepower.