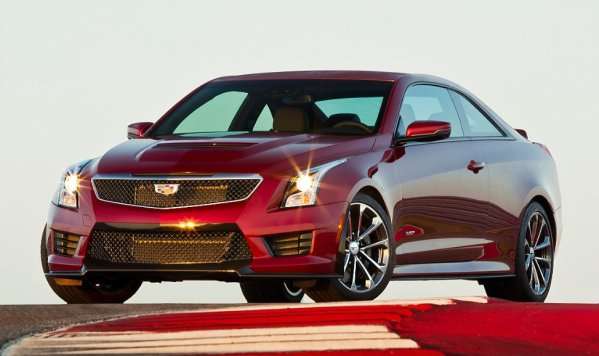 Was an LS7 Cadillac ATS-V Spotted in Dearborn?

There have been rumors floating around the internet that General Motors might be working on a higher performance version of the Cadillac ATS-V with the LS7 V8 from the Camaro Z28, and local photographer Nathan Smith may just have witnessed one of these beasts in person parked along the streets of Dearborn, Michigan.
Advertisement

Now, I should start by pointing out that there is no official word from General Motors that the Cadillac ATS-V will ever have any V8 – let alone the high revving, lightweight LS7 from the C6 Corvette Z06 and the 5th gen Camaro Z28. However, since shortly after the ATS-V was introduced with a specially tuned version of the twin turbocharged 3.6L V6, there have been rumors that GM was working on shoehorning the LS7 V8 into the sleek Caddy coupe in an effort to offer the ultimate in luxury sports coupe handling.

Since the Cadillac ATS rides on the same chassis platform as the 6th gen Camaro, it seems very likely that a V8 would fit right into the engine bay of the compact Caddy coupe. The LS7 isn’t vastly more powerful than the twin turbo V6, but it might be better suited for road track use, considering that the LS7 was specifically designed for ultra-high performance road handling cars, including a high capacity oiling and cooling system.

The LS7 ATS-V seems like a reasonable possibility, but we haven’t had anything but vague rumors on this topic – until this morning.

Beastly ATS-V in the Wild
One of the local photographers I follow on Instagram is named Nathan Smith, and he posts an awesome sampling of foreign and domestic cars, new and old. He posts cars that he sees out and about along with cars that he sees at local car shows. This morning, he stumbled across an interesting vehicle in Dearborn, innocently parked on the side of the road. It looked like your average Cadillac ATS-V with Manufacturer’s license plates, but Nathan explained that this car was different.

The Cadillac ATS-V parked in Dearborn had lightweight Sparco racing seats and a roll cage. I live near the GM Proving Grounds and I previously lived near the Ford Proving Grounds. I have seen a great many test cars on the road – including a large sampling of ATS-V mules around Milford, but I cannot ever recall seeing a test car on the road with a roll cage.

All performance cars are pushed to their limits during internal testing, but they are tested by the engineering team in a similar form to what consumers will get in their local dealership. There might be some unique tidbits here and there, including safety items, but even with the highest performance test cars like the Corvette Z06 and the Dodge Viper, they aren’t tested with a roll cage.

That extra measure of safety leads me to believe that this is a particularly fast Cadillac ATS-V; one which is being tested so hard that they are concerned about it flipping over. Then again, a roll cage adds to chassis rigidity, so a car designed for a twin turbo V6 – but with a stronger V8 fitted under the hood – would benefit from the extra stiffness added by the cage.

Of course, this Cadillac ATS-V could just be another test mule that happened to get a roll cage and lightweight seats, but in my opinion, this car bolsters the rumors that an even hotter ATS-V is on the way.

Update: The image has since been removed from the IG account, so perhaps he did catch something special - but it could be some time until we get any official word on a higher performance ATS-V from GM.