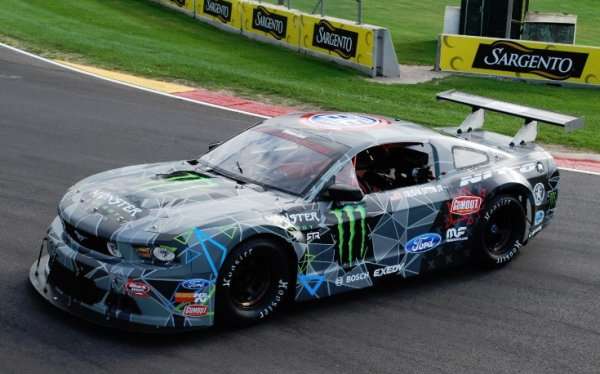 Vaughn Gittin Jr is arguably the most famous American ever to compete in the action packed world of drifting, but this weekend, Gittin and his trusty Ford Mustang are going road racing in the multi-class Trans Am Series.
Advertisement

In the world of American drifting, no one has made a bigger impact than Vaughn Gittin Jr. While the sport is dominated by Japanese drivers and cars, Vaughn Gittin Jr and his Ford Mustang have long been handing beatings to the best from around the world, making him one of the biggest drivers in the sport. If you are not familiar with drifting, it is a scored motorsport where judges use a series of fairly intricate criteria to decide the winner. It is not a “first to the line wins” sort of motorsport, as it is just as much about style as it is about going fast, serving as more of a long, continuous burnout than a race by traditional standards.

However, Vaughn Gittin Jr and his Ford Mustang are taking on a whole new challenge this weekend, as the drift legend takes on the world of Trans Am road racing. Rather than roasting the tires and working on style points, Gittin and his trusty Mustang will have to focus on getting the most traction possible and getting to the finish line first.

Gittin Takes on Road America
This weekend, Vaughn Gittin Jr will try his hand in the world of Trans Am road racing, with his big trial coming at the legendary Road America. Rather than one of his normal production-based Ford Mustang drift cars, Gittin will pilot a Ford Mustang race car from Loshak Racing through the tough TA2 class in the Next Dimension 100 in Wisconsin. This class is comprised entirely of Ford Mustang, Chevrolet Camaro and Dodge Challenger teams, making TA2 an American muscle car class – which is a fitting place for the man who has made a name for himself in his Monster Energy Drink-inspired Ford Mustang.

Not only is Gittin relatively new to this type of racing, but he is also entering a TA2 class with a few dominant teams. Fortunately, the Loshak Racing team has had some strong showings this season so along with Gittin’s driving skills, he has the experience of a seasoned team on his side.

Unfortunately, the race is not televised live, but those folks who want to watch Vaughn Gittin Jr take on the Trams Am world, you can catch the action on the CBS Sports Network on September 12th and 10am EST.

“Just a Drifter”
While I have seen the comments in the past about drifters not being real racers, I should point out that some of the best-known professional drivers in the world have spent time in the pro drift ranks. Top Gear’s Tanner Foust was a drift champion before going on to become a rally racing champ, as was Rhys Millen – who has been successful in a long list of racing types. Both of these guys are also stunt drivers, among other things.

While Vaughn Gittin Jr is certainly an underdog heading into this weekend’s race at Road Atlanta, there is no doubt that he will have the biggest fan following of anyone in the field cheering him on – including your humble narrator.