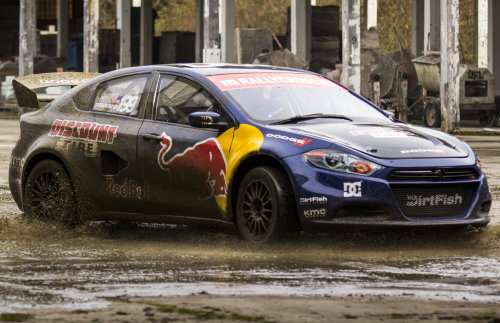 The Chrysler Group has announced that when the 2013 Global RallyCross season kicks off in a couple week at X Games Brazil, there will be two different Dodge Dart rally cars with Travis Pastrana returning for his second full season while fill-in driver Bryce Menzies will become a full time GRC racer for the new season.
Advertisement

“Travis Pastrana exemplifies what action sports activities are all about and he fits perfectly with the Dodge brand and the SRT Motorsports team,” said Ralph Gilles, President and CEO – SRT Brand and Motorsports. “There is no doubt that Travis’ personality and driving skills will continue to bring energy and excitement to this season.”

During the 2012 Global RallyCross season, Travis Pastrana ran a full schedule with his best outing coming in New Hampshire where he won in just the fourth race for the budding Dart rally team. Mechanical issues, health problems and dirty driving by the competition caused the Dodge rally racer from putting up a real challenge for the wins in his other four events where the finished 8th, 10th, 15th and 16th. However, in those four events where he failed to finish the race, his Red Bull Racing Dart was among the fastest cars in the field.

“We had a really great program with the Dodge Dart last year,” said Pastrana. “But I think we’ve got the car a lot better this year. Last year I only finished one race, but we won that one! I feel like we’re a lot more prepared coming into this season.”

On the other hand, Bryce Menzies served as a fill-in driver, relying on Pastrana’s backup car at the 2012 Los Angeles X Games while also competing at the 2012 GRC finals in Las Vegas when Pastrana was out after his shoulder surgery. In his two starts, Menzies finished 14th at the X Games and 8th at the season finale. Menzies is a decorated veteran of the offroad racing scene with a bunch of wins in the TORC truck racing series but his transition to the dirt, tarmac and high flying antics of the GRC scene didn’t go anywhere near as well as he would have hoped.

“I’m just really excited to be a part of Pastrana Racing,” said Menzies. “My expectations are pretty high. We have an amazing team—Travis Pastrana is a great guy, he puts a lot of effort into making an awesome team. We have an awesome car. As long as we stay consistent, and we can make the right changes to the car and work together, I think we’re going to be a good contender for the championship this year.”

Leading up to the 2013 X Games Brazil event, Travis Pastrana and Bryce Menzies have spent time practicing and testing at DirtFish rally school in Snoqualmie, Washington. In addition to the training exercises ahead of the season, Menzies should be far more competitive once he has a chance to compete regularly in the GRC Dart while Pastrana comes into the season as one of the faces to watch for this season that is likely to span 7 months with at least 9 events.

Unfortunately, the 2013 Global RallyCross schedule has been kept somewhat of a mystery. On Wikipedia, there is a schedule for the 2013 GRC season but the reference link on the GRC website leads to a blank page. When visiting the GRC website, there is a schedule tab but it lists last year’s schedule so the only information that we have to go on is what is posted on Wikipedia. These dates arent particularly reliable as there are a few mistakes in the schedule but the biggest get with come when the teams have to race at the X Games in Los Angeles in early August and then in Atlanta on the 10th.

With any luck, as the 2013 GRC season is only a couple weeks away, the organizers will put a full schedule up on their website soon as it would be a whole lot easier for enthusiastic journalists like myself to cover the sport if we knew for sure when the events were taking place. In any event, Dodge rally cross fans will definitely have two teams to root for in 2013 – whenever the races take place.

Update: Chrysler has added a video of Bryce Menzies and Travis Pastrana testing their new Dodge Dart rally cars with softcore hoonage along with a little "Days of Thunder" action at the beginning.