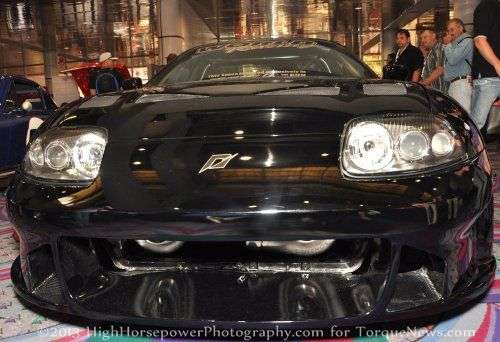 Takeshi Uchiyamada is known within Toyota Motor Corp as the Father of the Prius but the soon-to-be-chairman has set his sights on a new goal – developing a modern Toyota Supra under the joint venture with BMW.
Advertisement

Last month, we looked at the ongoing cooperation between Toyota and BMW that could bring about a midsized sports car that would most likely be a modern take on the famed Toyota Supra. At that point, the suggestion of BMW helping Toyota develop a new Supra was based on nothing but rumors but recent comments by Takeshi Uchiyamada reinforce the possible return of the Supra.

Takeshi Uchiyamada is best known for his efforts in developing the Toyota Prius but it is expected that Mr. Uchiyamada will be introduced as the new Chairman of Toyota at the Japanese automaker’s annual shareholders' meeting this week. While it might not seem like a big deal for the “Father of the Prius” to want a new Supra – it is a big deal for the new Chairman to want a new Supra. In addition to that new position within the company, the 66 year old Uchiyamada is also in charge of his company’s workings with BMW under their current joint venture.

While speaking at a business event in Japan earlier this week, Mr. Uchiyamada explained that he would like to see the venture with BMW yield a midsized sports coupe that would serve as the evolutionary successor to the famed Toyota Supra but he pointed out that decisions of this nature are left to engineers. He also stated that introducing a new sports car that is similar to the Toyota GT86 would be “futile”. Fortunately for both Uchiyamada and those consumers who wish to see a modern day Supra, the GT86 program is so vastly different from the Supra that the performance world knew and loved in the 1990s that there shouldn’t be too much concern about the GT86 overlapping with the next Supra.

The Toyota GT86 was designed jointly with Subaru with the intention of creating a small sports car that focused primarily on incredible handling with a very low center of gravity, a very lightweight chassis and – much to the dismay of many performance enthusiasts – a naturally aspirated 4-cylinder engine that offers around 200 horsepower. On the other hand, the final generation of the Toyota Supra (shown above on the right) was all about big power with the American version churning out 320 horsepower from a turbocharged inline-6 engine that was fitted under the hood of a considerably larger vehicle. Even though the Supra handled very well, it was a car that was as close to an American muscle car as any Japanese automaker has ever gotten with power levels that met or exceeding the biggest names in American performance during those years. Because of that, the Supra remains a legend in the Japanese performance community and it is still common to see the final generation of the Supra in action at drag strips around the country.

Considering the rumors that Toyota and BMW are jointly developing midsized sports car that could show itself as soon as the 2013 Tokyo Motor Show later this year, it seems to be a very real possibility that Mr. Uchiyamada’s hopes of a modern Supra could come to volition – at least in concept form. When Toyota and BMW first announced their partnership, it was widely expected that the two would collaborate to develop some super efficient vehicles with both gas-electric hybrid and fuel cell technology but over the past few months, it seems that all of the talk has been about a pair of sports cars coming from the partnership.

Perhaps the benefit for Toyota in the short term will be a modern Supra with help from the performance gurus at BMW while the German automaker could benefit from Toyota’s experience with hybrid technology further down the road. This prospective Supra would likely be slightly larger than the Toyota GT86 and the BMW Z4, rear wheel drive (of course) and with BMW’s success with high performance inline 6 cylinder engine – the next Supra could pack a similar drivetrain design to the models from the 1990s. However, unlike the Toyota 2JZ-GTE engine that powered the last of the Supras, the modern Supra could pack a BMW engine and even more power.

Needless to say…should any more information on the future of the Toyota Supra surface you will find it right here on TorqueNews.