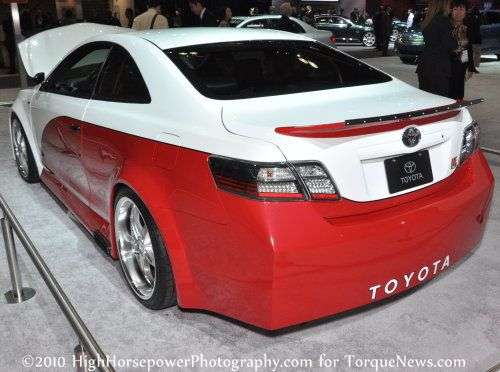 Toyota has issued a technical service bulletin to dealerships explaining that on some of the Camry and Avalon sedans which received the “fix” for unintended acceleration, the bolts used to secure the pedal assembly could have been stripped, causing the pedals to work their way loose.
Advertisement

When Toyota recalled millions of vehicles last year to try to prevent the lethal unintended acceleration problems, one of their “fixes” was to remove the accelerator assembly to shave off three quarters of an inch from the bottom of the pedal (to prevent it from being stuck against the floormats) along with adding a shim inside of the assembly to prevent the throttle from hanging open. Evidently, when they removed the pedal assemblies, the nuts that secure the pedal assembly to the floorboard may have become stripped. If these stripped nuts were used and the car was sent back to the customer, the pedal assembly could work its way loose and you can imagine the chaos created by driving down the road and having your gas pedal fall from its mounting position.

Toyota insists that this TSB to fix the loose pedal assemblies does not affect any cars on the road, but Consumer Reports claims that over 500 Toyota owners with “repaired” vehicles are complaining that their accelerator pedal has side to side movement or simply feels loose. (Click here for the Consumer Reports article stating that over 500 complaints have been received)

For those unsure of what a TSB is...they contain information for dealerships explaining how to handle common problems. These are typically issues that are common across a certain model range but they don’t pose any risk to the driver and passengers so the customers are not notified and the automaker is not required to announce/fix the problem in question.

An example of another TSB…about ten years ago, a certain automaker had an issue where the horn would honk at random times. Imagine that you are comfortably sleeping when you hear the horn on your truck honk…then again. You run outside, but your truck is locked and no one is around. This poses no risk to the driver but it is obviously a heck of an annoyance so a TSB was issued, explaining to dealership technicians how to fix the problem.

However, we are not talking about a horn honking in the middle of the night and having the accelerator pedal of your car fall from its mounting point while driving should be viewed as being more than an annoyance. If over 500 people have really complained about their gas pedals coming loose from the firewall, it sounds like this does indeed pose a threat to the occupants of the Camry and Avalon in question but also other drivers on the road. Toyota denies that any complaints have been received but they also denied that they were able to replicate unintended acceleration which we also now know, wasn’t the case.

In any case, Camry and Avalon owners who believe that their accelerator pedal assembly may feel loose or have side to side play since having the recall repair performed should probably head back to your neighborhood Toyota dealership for yet another fix. Hey, maybe they will get it right this time?

This TSB reportedly applies to Avalons from 2005-2010 and Camry/Camry Hybrids from 2007-2010 which have received the “fix” for unintended acceleration. If you own one of those models and you have not had the recall service performed, there have been more reported accidents due to unintended acceleration with the most recent costing two people their lives – so a trip to your Toyota dealership is long overdue.