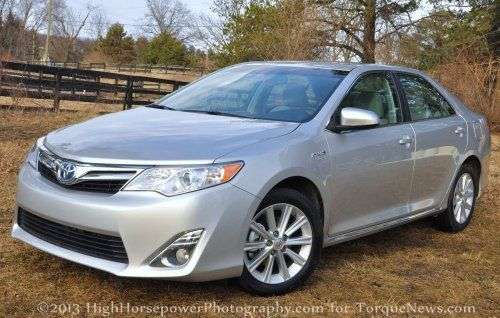 Toyota Motor Sales USA announced this morning that the Toyota Camry has officially hit the 10 million mark for sales here in the United States – a milestone that comes in the same year that the Camry celebrates its 30th anniversary in the US market.
Advertisement

The Toyota Camry first hit the US market in 1983 and in the first full year (12 months) of sales, the company sold 52,651 examples of their soon to be famous midsized sedan. According to Toyota, 773 of those original 1983 Camry sedans are still in operation. Based on the early popularity, Toyota launched production of the Camry in Georgetown Kentucky in May of 1988. Since those early days, Camry has grown to be one of the most popular cars sold in the United States – spending the last 11 years as the reigning bestselling car in America.

"We couldn't be more excited about Camry's 10 millionth sale in the U.S.," said Bob Carter, senior vice president of automotive operations of Toyota Motor Sales, USA, Inc. "With the support of so many loyal customers, Camry has truly become part of the country's fiber. For seven generations, Toyota dealers have also been instrumental in getting Americans behind the wheel of a Camry. Camry is definitely helping Toyota Go Places."

Of those 10 million Toyota Camry wagons, coupes and sedans sold over the last 30 years, Toyota Motor Sales believes that around 6.4 million of them are still in action on US roads. Toyota states that “virtually all” Camrys sold in the US are built in the US and according to the National Highway Traffic Safety Administration, roughly 75% of the components used to build these Camrys are sourced from companies in the US.

While the Toyota Camry has not fallen from the top spot in car sales in the United States over the last 11 years, the Camry has been facing increasingly stiffer competition from some other major players in the midsized sedan segment. Cars like the Ford Fusion, the Honda Accord, the Chevrolet Malibu and the Nissan Altima have stepped up their game a great deal – especially over the past few years – and those are the vehicles that are most likely to cut into the Camry’s market share while trying to oust the Camry from the top spot in US car sales. In addition to the influx of impressive new options in the midsized segment, there is also the fact that the Camry is no longer available in the coupe or wagon forms that have been offered on and off during the 30 year run of the Camry name.

Even with those variables, the Toyota Camry is moving at full speed ahead and it doesn’t appear like the US industry’s bestselling car is going to back down from the competition any time soon. Congrats to Toyota Motor Co for not only offering a top selling car for 30 years but also reaching the incredible milestone of 10 million units sold in the US market.

LG's New EV Battery Plant Is a Welcome News for Tesla
Tesla Giga Berlin's New Hurdle: It's Not Only the Gov't, but Now Tesla Itself
END_OF_DOCUMENT_TOKEN_TO_BE_REPLACED