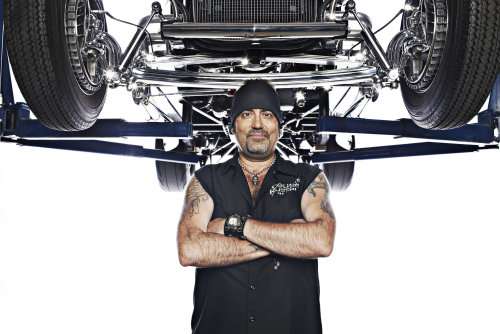 I recently had a chance to fire off a few questions to Danny Koker, the head honcho on the History Channel’s program Counting Cars which will air the start of its second season tomorrow, April 9th – giving me a chance to pick the brain of one of television's best known car guys.
Advertisement

While Danny Koker and his Las Vegas custom shop Count’s Kustoms are now the focus of the History Channel show Counting Cars, many Pawn Stars fans may recognize Danny as the man responsible for providing the reasonable value of the cars that roll into the Harrison’s pawn shop. However, after countless cameo appearances on Pawn Stars, the History Channel launched the program Counting Cars in August 2012.

Counting Cars chronicles Danny’s shop and some of their amazing custom builds while also following him and his guy’s around the greater Las Vegas area where he actively hunts for the shop’s next big project. Danny buys rusted out heaps sitting in back alleys and fully finished hot rods alike – utilizing his team of top notch customizers to transform these vehicles into complete unique cars to sell to their customers. It is unlike anything else on television and where Pawn Stars offers a look at all sorts of historical items; Counting Cars is a high performance lesson on the history of the automobile.

Leading up to next week’s season two debut of Counting Cars, I had a chance to ask Danny Koker some questions about himself and his views on the industry.

TN: Your Dad’s Ford Mustang Shelby GT350 inspired your love of cars…was there something or someone that inspired you to make customization and restoration your profession? Did your Dad and his interest in vehicles drive the early stages of your career?
Danny: Absolutely. He completely encouraged me to do what I wanted to do with cars and bikes. It was also very important to him that I had an education. He tried to get me to do the college thing, but it became evident that school and I were not meant to be. The entire time he was encouraging education, he was also encouraging me to follow my dream. So I credit him hugely. There is another fellow named Sugar Bear out of California. He is a huge influence on my bike building.

TN: How old were you when you started working in the hot rod/custom scene?
Danny: I did my first bike when I was 8 years old with my Dad.

TN: How old were you when you opened your shop?
Danny: I was 31 when I turned it into an official business. It had always been a hobby while I was doing school and work.

TN: Do you have a favorite brand…such as Ford, Chevy, Dodge etc? For instance, I am a Mopar guy with a handful of modified Dodge products.
Danny: I’m an equal opportunity car guy. I can appreciate certain model by all makers. My family from Detroit all worked for Ford Motor Company, so I have a soft spot for Ford as a company, but when it comes to cars I do not have a preference.

TN: In your opinion, what is the best American V8 ever made for a production vehicle?
Danny: A small block Chevy 350 is such a versatile motor. It has showed the test of time. It’s versatile and cost effective.

Counting Cars also occasionally stops in Danny’s restaurant that sits a few miles off of the Vegas Strip - appropriately named Count’s Vamp’d – which I have visited and would recommend to anyone visiting Las Vegas. Great food in Vegas without outrageous prices is hard to come by but Vamp’d offers just that while also offering some of the more affordable beer Ive had in Vegas (outside of the free booze in the casinos). I would recommend the ribs with fries if you make the trip and in addition to the great, inexpensive food, you can also see some incredible paint work around the eatery done by the guys from Count’s Kustoms.

Again, the second season of Counting Cars debuts tomorrow (Tuesday April 9th) on History. You don’t have to be a rabid gearhead to enjoy this show so if you even have a passing interest in the history of the automotive world including motorcycles, make sure to tune in to Counting Cars tomorrow night. Check your local listings for the exact time.