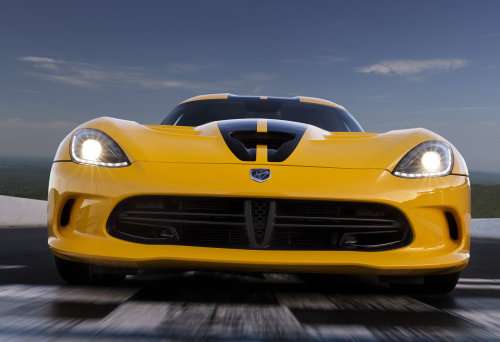 While it did not come with the amount of publicity and fanfare that we have come to expect when a new model begins production, the 2013 SRT Viper assembly began building new Mopar supercars earlier this month with the first units expected to reach consumers sometime in February 2013 – only after the initial production units are meticulously inspected to ensure the highest level of quality.
Advertisement

Typically, when a new model (especially a car that is as eagerly anticipated as the 2013 SRT Viper) begins production, the automaker in question makes a big deal about it but even though the Chrysler Group stated that the new Viper production would begin in November or December, both of those months came and went with not so much as a word from anyone about the birth of these new American supercars. Where many new models (such as the 2013 Dodge Dart) begin production with an accompanying press release and some images of the first units rolling off of the assembly line, Chrysler had surprisingly little to say about the Viper when the time came for the American automaker to launch production of their new halo supercar – until now.

Today I had a chance to speak with a representative of the SRT brand (who was kind enough to answer my questions during the company’s holiday break) and I learned that the assembly line in Chrysler’s Connor Avenue plant in Detroit tasked with producing the 2013 SRT Viper did indeed get to work earlier this month. To be exact, the Connor Ave plant responsible for every Viper ever built since 1995 began pumping out the 2013 SRT Viper on December 5th with around 150 specially trained workers carefully assembling the newest American supercar. However, unlike other models where the start of production was a publically celebrated event, the start of production for the new SRT Viper went unannounced by the company.

Chrysler’s Dan Reid explained to me that while production of the 2013 SRT Viper began at Connor Ave on December 5th, the company is “taking extraordinary measures to ensure that every SRT Viper meets our stringent quality standards before it leaves the plant”. Presumably due to those extraordinary measures, the complete process of assembling the 2013 SRT Viper and Viper GTS is taking longer than it would for something like a Dodge Dart or a Dodge Charger as the company wants to make certain that every new 640 horsepower Mopar supercar is flawlessly built before heading to dealerships and to fortunate new owners around the country. The extra thorough quality control process will slow the delivery of the early 2013 Viper units, likely in an effort to make sure that the first new Vipers do not have the “bugs” found in many early batches of brand new cars. After all, no one wants to find out that there is a bug in the electrical system of their $100,000+ supercar when they are blasting around a road course or along a desolate highway at high speed. For the Chrysler Group, it makes good sense that they are more concerned about making sure that everything is done right with the first production units of the 2013 Viper rather than rushing to get cars to consumers around the country.

While the expected launch of production in November 2012 would have led many to expect that the first copies of the 2013 SRT Viper would reach both dealerships and consumers before the end of the 2012 calendar year, Chrysler expects that this extensive quality control process will delay the delivery of the first new Vipers until February 2013. This might come as a disappointment for those who were hoping to ring in the New Year by doing a big, smokey burnout in their 2013 Viper but considering the weather that has hammered many states around the US – it is safe to guess that at least some of the new Viper owners don’t live in an area where they could enjoy their new supercar right now anyways.

Some of you out there might be asking yourself “why didn’t Chrysler announce the start of 2013 SRT Viper production?” Well, considering how so many people in the media these days like to nitpick a company for anything possible, Chrysler was smart to quietly launch production as to avoid having skeptics question why it was taking so long to get the first units out to the public. That being said, anyone who questions an automaker’s decision to apply strict quality control processes to a new supercar is likely more foolish than the people who believed that the world was actually coming to an end on December 21st...and that includes more than a few people who make a living as a member of the automotive media.

So, for those of you keeping track, the “birthday” for the 2013 SRT Viper should go down in automotive history as being December 5th 2013 as that was the day that the workers at the Connor Avenue Assembly Plant in Detroit began building the first copies of the newest iteration of the legendary Mopar supercar.

Again, a special thanks to Chrysler’s Dan Reid for taking the time to answer my questions during the holiday break – thus giving so many Mopar lovers around the world something to look forward to in the first quarter of 2013.

LG's New EV Battery Plant Is a Welcome News for Tesla
Tesla Giga Berlin's New Hurdle: It's Not Only the Gov't, but Now Tesla Itself
END_OF_DOCUMENT_TOKEN_TO_BE_REPLACED