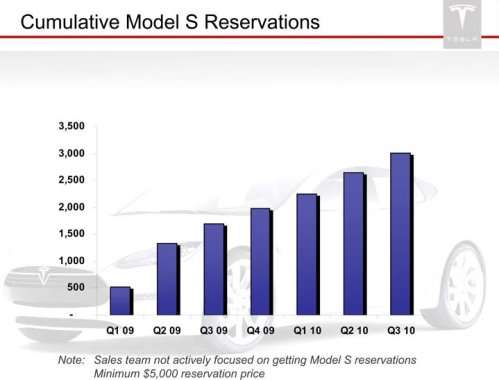 In a form filed recently with the US Securities and Exchange Commission (SEC), Tesla Motors revealed a handful of information about the current goings-on within their company, including the fact that they have already received 3,000 pre-orders for the 2012 Tesla Model S sedan – accounting for $15 million in revenue from a car over a year away from seeing production.
Advertisement

In this SEC filing, Tesla included a fancy little powerpoint presentation that revealed information about their joint ventures with companies like Panasonic, Daimler and Toyota along with a look into what is coming from the automaker in the next two years with special attention paid to the upcoming Tesla Model S.

The Tesla Model S is expected to see around 20,000 units annual when production begins in 2012. During the 2011 calendar year, the Model S will undergo the required crash tests (with an expected 5-star safety rating) and as we head into the 2012 calendar year, deliveries will begin. The company has been accepting pre-orders for the 2012 Model S since the sedan’s debut in 2009 with around 3,000 people already shelling out the $5,000 required as a deposit. Since being introduced, the Tesla Roadster has moved just over 1,400 units in 31 countries so it will be interesting to see if the 2012 Model S will receive enough attention to warrant 20,000 units per year.

Since the company isn’t making a fortune off of current vehicle sales, Tesla used this presentation to the SEC to brag about some other deals with automakers like Toyota and Daimler. Toyota made a $50 million investment in Tesla during the company’s IPO, followed by a $9 million contract to build the Toyota RAV4 EV concept – with an addition $60 million in revenue expected from the progression of the RAV4 EV production. In addition to Toyota, Tesla has been hard at work providing Daimler with over 1,500 battery packs for the Smart ForTwo Electric Drive along with expectations of at least 500 battery packs ordered for the new Mercedes Benz A-Class EV; projects that could bring Tesla as much as $12 million by the end of the year.

Things appear to be going well for the electric automaker even though sales of the Tesla Roadster have been sluggish and the production of the far more functional 2012 Tesla Model S isn’t due for another year. Now that more electric vehicles are hitting the road, it will be interesting to see how well the Model S holds up in a segment that is quickly filling up with larger, well-known automakers. Should the Model S succeed, Tesla could make a name for itself, with plans of a convertible, a van and an SUV in the coming years but should the electric sedan flop, Tesla may have to settle for being a battery pack provider.

Click here for a look at the SEC filing from Tesla Motors.