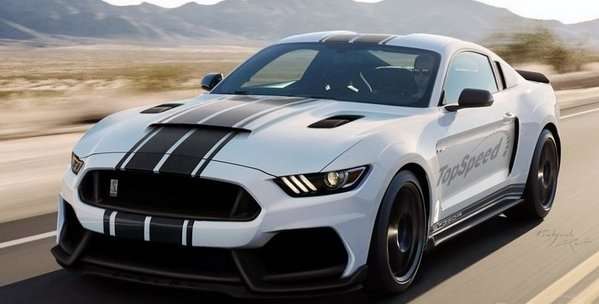 The new Ford Shelby GT350R Mustang will debut next week at the 2015 Detroit Auto Show, but thanks to the folks at TopSpeed, we have a rendering showing what this new model might look like when the sheets are pulled away on Monday.
Advertisement

First off, I want to point out that there are no actual images of the Ford Shelby GT350R Mustang. This is a rendering imagined by artists at TopSpeed and I wanted to be clear about that, since we have had some readers misunderstand renderings in the past.

However, while this is not an official image of the GT350R Mustang, this image give us a chance to see what the next Shelby Mustang might look like when it is introduced on Monday. The TopSpeed team uses a combination of spy shots and insider information to create the cars shown here and in the past, their renderings have proven to be very accurate. For instance, their GT350 Mustang rendering proved to be very similar to the real thing, so I suspect that these images will at least be close to the real thing.

The TopSpeed Shelby GT350R Mustang
When the 2016 Ford Shelby GT350R Mustang debuts next week, it will likely be a more extreme, more track ready version of the GT350 Mustang that we have already seen. It will likely have more unique features that we cannot see, but there will almost certainly be a collection of exterior features that allow the “R” version to stand out from the rest of the new Shelby Mustangs.

The TopSpeed artists have taken the Shelby GT350 Mustang and converted it so the GT350R by making the front end more aggressive, adding a hood with more airflow, vents along the side and a big rear spoiler. Up front, the GT350R has a front fascia that is very similar to the GT350, but the chin portion has been pushed closer to the ground and the result is much larger openings across the front. This would be ideal for feeding more air to the engine and the brakes, while also improving aerodynamics. TopSpeed has also added a scoop to the hood that joins the dual heat extractor vents from the Mustang GT.

Along the side, this GT350R Mustang has a unique vent in the front edge of the rear quarter panel along with unique vents over the rear quarter windows – both of which could be used to improve cooling to both the rear braking system and the rear differential.
Finally, there is no full rear end shot of the TopSpeed Shelby GT350R Mustang, but this one shot shows that it clearly wears a large duckbill style rear wing – one which would happily accept an adjustable Gurney flap.

What We Cannot See
In addition to the physical changes made to the Ford Shelby GT350R Mustang that will improve engine cooling, brake cooling and aerodynamics, the GT350R should include mechanical items to make it more track ready than the GT350. The “R” could add bigger brakes, a more heavily track-tuned suspension and some additional cooling items while doing without things like air condition or a full stereo system.

The Ford Motor Company press conference at the 2015 North American International Auto Show is Monday morning, so we have less than a week to wait to meet the Shelby GT350R Mustang in the flesh.