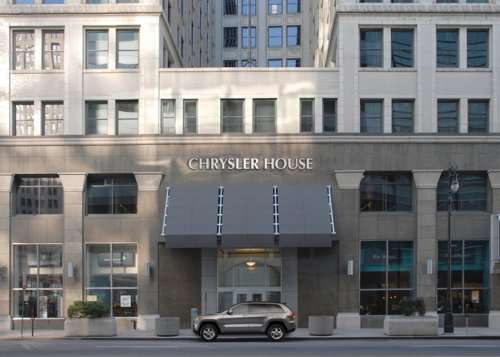 Sergio Marchionne to get new office in downtown Detroit

The Chrysler Group may root their headquarters in the Detroit suburb of Auburn Hills but as a part of the automaker’s commitment to the city of Detroit, Chrysler is opening a new business center in the new Chrysler House building in Detroit – while will include a new office for Chrysler and Fiat CEO Sergio Marchionne.
Advertisement

The new downtown business center of the Chrysler Group will take up the top two floors of the building to be named the Chrysler House. This building, which was previously known as the Dime Building, is currently owned by Rock Ventures LLC, the financial group overseen by Detroit business and founder of Quicken Loans Dan Gilbert. Located at 719 Griswold Street in Detroit, the Dime Building is easily recognized for its unique design, with a U-shaped form created by the central light court starting at the third floor. The portion of the new Chrysler House occupied by the new Chrysler Group offices takes up 33,000 square feet on the 22nd and 23rd floor. 70 employees will work in the new Detroit offices with the most prominent being company Chief Executive Officer Sergio Marchionne – who will have both an office and a private conference room.

Some critics of the Chrysler Group like to frequently point out that even though they are a “Detroit automaker”…their headquarters are actually in nearby Auburn Hills. However, regardless of where their corporate headquarters are located, the company has a clear commitment to the city of Detroit and this new business office is just one small example.

The Chrysler Group is the only American automaker to have two production facilities that are actually in the city of Detroit. This includes the Jefferson North Assembly Plant (JNAP) where the Dodge Durango and Jeep Grand Cherokee are built and it will also serve as the future build place of the Maserati Kubang luxury sport SUV. The other plant in Detroit is the Connor Avenue Assembly Plant – a building that most people will recognize as the build place of the 2013 SRT Viper (and almost every other Viper since 1995).

On top of having the two production facilities where some of the most popular SUVs and most powerful sports cars in the world are built, Chrysler also has their Mack Avenue Engine Complex with two facilities employing around 180 workers to build engines.

The new home of the Great Lakes Business Center of the Chrysler Group in the newly renamed Chrysler House building will provide support to the massive Auburn Hills campus-style headquarters. As the city of Detroit makes the effort to improve the overall quality of the area (especially in downtown Detroit), Chrysler’s support should help show the country and the world that Detroit really isn’t as bad as it’s made out to be.

Chrysler expects that the move to the new Chrysler House facility will be completed by late summer.