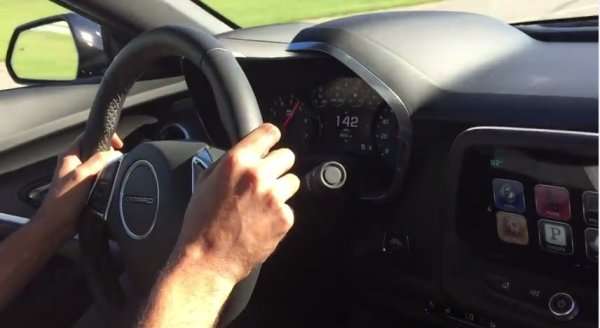 Ride Along in the 2016 Chevrolet Camaro SS at MIS (Video)

A video has surfaced online showing the in-car footage of a ride along in the 2016 Chevrolet Camaro SS, giving us a chance to experience the next generation GM muscle car from a sort of first-person perspective – while also allowing us to hear the LT1’s roar from the cabin.
Advertisement

The American muscle car world is eagerly awaiting the debut of the 2016 Chevrolet Camaro and while the turbocharged 4-cylinder and the 3.6L V6 will likely be the bigger sellers – the 455hp Camaro SS is the version that draws the most attention, and for good reason. With the smaller, lighter chassis, the newest version of the Magnetic Ride Control suspension system and the new LT1 V8, this should be the best performing Camaro SS of all time, whether you are on the road course or on the drag strip.

Unfortunately, the odds are good that many people who dream of tearing around a road course in the 2016 Chevrolet Camaro SS will never be able to do so, but this video offers you a chance to see and hear what it sounds like to take the 6th gen Camaro around a road course – and along the high banks of Michigan International Speedway’s NASCAR oval.

2016 Camaro SS Track Video
In this video, we watch from an in-car camera as someone heads out onto the road course of Michigan International Speedway, starting on pit road and quickly making the hard left into the road course portion of the track. As the two occupants enjoy the drive around the tight track and come to the end of their first lap, the driver takes the Camaro SS up onto the banking of the NASCAR oval and lets the LT1 strut its stuff, hitting speeds in the 140mph range (speedometer reads 142 in the image above) before bringing the car back down to a safe enough speed to handle the tight first turn.

Really, it looks like the Camaro SS handles the turns very well and the guys in the video talk about how well it handles the rougher portions of the track better than some other cars they’ve tested at MIS. Of course, the V8-powered Chevy muscle car also accelerates well down the long, banked straightaway, so for someone who plans to spending lots of time with their Camaro SS at the race track – this video should have them even more excited to get the 6th gen muscle car in their garage.

Note: I’m not sure who is driving of filming here but they have a powerful preference for “the F word” during the first lap, so this video is best watched away from young children, or with the sound turned down – although turning the sound down kills the fun of hearing the LT1 in action.

However, for those who don’t mind some sea-worthy language amidst the roar of the LT1 V8 of the 2016 Camaro SS, crank up your speakers and enjoy!