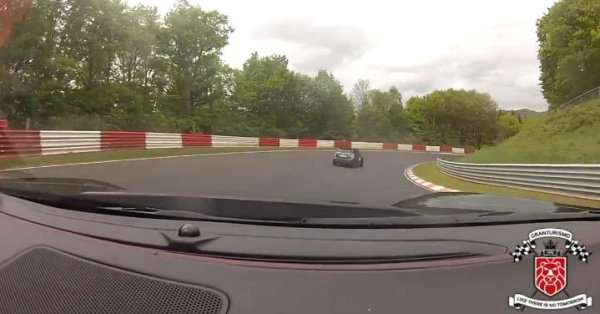 Ride Along in a 2014 Chevrolet Corvette Stingray on the Nurburgring

While this video of the 2014 Chevrolet Corvette Stingray doesn’t offer the on-board telemetry or lap times for the newest American sports car on the most famous European road course, this 10 minute long video of the C7 lapping the Nürburgring is our first look at the new Stingray on the Ring – even though this is far from a record-setting lap attempt.
Advertisement

Over the last few decades, the Chevrolet Corvette and Dodge Viper have been going toe to toe on race tracks all over the world and the most hotly contested lap record between the Vette and Viper is that of the German Nürburgring Nordschleife. Measuring almost 13 miles long with 160 turns, the Nürburgring tests a vehicle’s capabilities like no other track in the world so in the world of sports cars – there is no track tougher to tame than “The Ring”. The Dodge Viper SRT10 ACR currently holds the record for the fastest American car to lap the Nürburgring Nordschleife, trailing only the Nissan GT-R Nismo package and the Porsche 918 Spyder in the battle for the fastest road going production car lap ever.

It is very widely expected that the C7 Chevrolet Corvette will be the car to hit the Nürburgring and dethrone the Dodge Viper ACR. While it is all but certain that the 2015 Corvette Z06 will beat the Viper around The Ring, the “normal” Corvette Stingray coupe has proven itself to be quicker around some tracks in America so there is a chance – albeit a slim one – that the Stingray will turn out a better lap time than the Viper.

While this is our first chance to watch the Corvette Stingray tackle the Nürburgring Nordschleife, this is far from a record setting run. In fact, this clip shows us a simple ride-along program during a stop on the Gran Turismo Event tour that hits tracks around the country and it is very clear from this 10 minute video that the driver either isn’t very experienced – or he isn’t all that interested in setting a scorching lap time as much as he is ripping around the world’s most infamous road course in the modern American sports car.

As you watch the video, you will notice that this 2014 Corvette Stingray gets passed by a variety of much less powerful cars including a Mini Cooper. You will also notice that this car very clearly isn’t being pushed to its limits in the turns or the straightaways…which is most obvious towards the end of the video as the driver babies the Stingray down the long straight that allows many cars to reach speeds nearly 200mph.

However, even with this video lacking the type of all-out driving that we would get from an official GM video of the Corvette attacking the Nurburgring, this is still a great chance to watch the new C7 Stingray in action on the world’s most famous and most challenging road course.