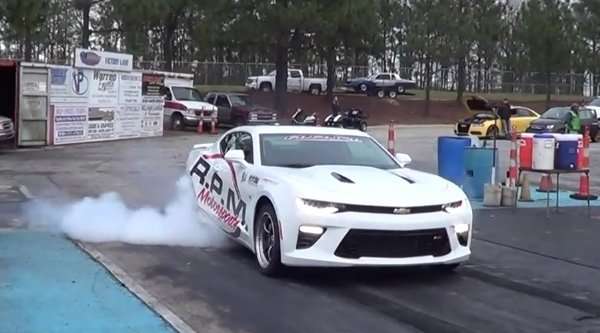 The Quickest 2016 Camaro in the Country Tickles the 9s

The 2016 Chevrolet Camaro has only been available for roughly two months, but RPM Motorsports has already gotten one of the 6th gen Camaro SS coupes very near the 9-second quarter mile range – running a 10.00 at 137 miles per hour and turning in what I believe to be the quickest quarter mile run by the new Chevy muscle car.
Advertisement

The 2016 Chevrolet Camaro SS is the most powerful, the fastest and the quickest high volume Camaro of all time (excluding high price, high performance packages like the 5th gen ZL1, Z28 and COPO), but in the muscle car world, there is no such thing as fast enough or powerful enough. As we all expected, shops around the country have been quick to tear into the 2016 Camaro SS to see how much power they can make and how quickly they can get down the quarter mile with impressive results. It took around a month before we saw the first 10-second 2016 Camaro and while I have yet to see proof of a 6th gen car running in the 9s – we have a video of one running a stunning 10.00.

The New Quickest 2016 Camaro
Last month we brought you a piece introducing our readers to the first 10-second 2016 Chevrolet Camaro SS. At the time, that was also the quickest new Camaro SS to hit the internet and since then, I have seen a handful of other cars running better times. I have been waiting for the first 2016 Camaro to crack into the 9s and while I haven’t seen proof of a 9-second Camaro, the Camaro in the video below gets as close as you can get with a 10.00 run.

This white 2016 Chevrolet Camaro SS was built by RPM Motorsports in North Carolina and it has a substantial-yet-short modification list. RPM added Lingenfelter Performance Equipment (LPE) ported stock LT1 cylinder heads, an LPE camshaft package, Kooks headers, a Kooks 3 inch full exhaust setup and a Nitrous Outlet 90mm plate kit fitted with 150 horsepower jets. Also, while they are not mentioned in the mod list at the beginning of the video, we can see that this Camaro is wearing a set of lightweight wheels with skinny tires up front and sticky track tires out back, although I cannot tell if they are drag radials or full racing slicks.

The video begins with the 2016 Camaro SS backing out of the trailer and it sounds freakin’ wicked. When the car gets to the burnout box, the video heats up a little more and the short clip ends with this bottled beast blasting through the top end traps in record time. The big board announces the run with a time of 10.00 seconds and a speed of 137.36 miles per hour.

There could be a quicker 2016 Chevrolet Camaro SS out there, but I haven’t seen one and in speaking to come hardcore Camaro enthusiasts, they have seen one either. Based on that, I am inclined to believe that this is the quickest new Camaro in the world and if anyone has proof of a quicker Camaro, please post it in the comments below and it will be featured as well.

In the meantime, crank up your speakers and enjoy this video of the 2016 Camaro SS running a 10 flat quarter mile.