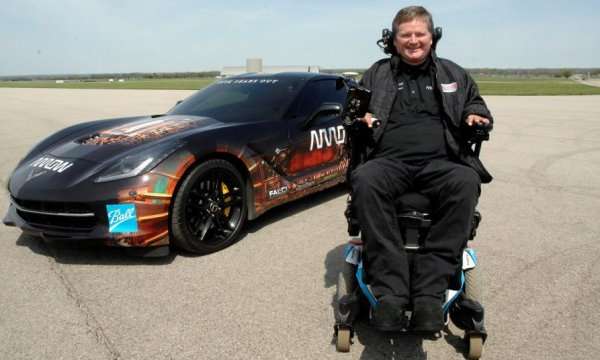 Quadriplegic Racer to Drive 2014 Corvette Stingray at the Indy 500

As part of the festivities surrounding the 2014 Indy 500, a 2014 Chevrolet Corvette Stingray piloted by former racer Sam Schmidt – who became a quadriplegic in 2000 after a crash during practice – will attempt to make 4 historic laps around the famed Indianapolis Motor Speedway using the motion of his head to steer the high powered American sports car.
Advertisement

Every running of the Indianapolis 500 is a piece of racing history but the 2014 Indy 500 will include 4 laps run by a 2014 Chevrolet Corvette Stingray being piloted by Sam Schmidt. Schmidt is known in the world of open wheel racing as a car owner today, but back in 2000 he was a driver in the IndyCar ranks. While running practice laps at Walt Disney World Speedway, Schmidt crashed his car hard enough to land him in the hospital’s intensive care unit for five weeks. When Sam came out of the hospital, his racing career effectively came to an end as the crash on the Florida track took away Schmidt’s ability to use his arms or legs. As a quadriplegic, it seemed like Sam would never again tackle the race track but thanks to a hefty dose of modern technology fitted into the 2014 Corvette Stingray – the paralyzed racer will get to make history during the week leading up to the 2014 Indy 500.

A group of companies including Arrow Electronics, Ball Aerospace, the US Air Force Research Lab, non-profit Falci Adaptive Motorsports and Sam’s own Schmidt Peterson Racing has built a 2014 Chevrolet Corvette Stingray that Schmidt will drive for four laps around Indianapolis Motor Speedway. Mind you, he will speed around the same track as the drivers of the Indy 500 in a new C7 Stingray without any use of his arms or legs…using only his head, neck and jaw to control the direction and speed of the new Corvette.

To perform this historic stunt, Sam Schmidt will wear a specially marked hat that will work with infrared cameras mounted around the cabin. These cameras will use the special hat to monitor the side to side and front to back motion of Sam’s head. As he tilts his head side to side, actuators connected to the steering wheel will allow Sam to steer the car and as he puts his head back, another actuator connected to the accelerator will allow him to pick up speed. Finally, a tube in Sam’s mouth will allow him to control the brakes simply by biting down. Just in case anything goes wrong, this particular Corvette Stingray is fitted with a special GPS tracking system that will prevent it from getting too close to the walls so if Sam steers the car within three feet of the wall, the GPS system will instruct the steering actuators to pull the car back towards the middle of the track. Also, just in case all else fails, there will be another individual riding shotgun who can take over the steering controls in case of any sort of emergency.

While this historic lapping of the track that plays home to the Indy 500 seems like more of a stunt than anything, this could play a very big role in the future of mobility for other quadriplegics. Should Sam Schmidt be able to safely pilot the Corvette at high speed around Indianapolis Motor Speedway, it could lead to further development of similar systems for real world use. Paraplegics who do not have use of their legs have been able to rely on hand controls to regain their freedom of driving and this technology – while it is seemingly a long way from public road use – could help those folks who don’t have use of their arms or legs to regain their ability to hit the open road.

From everyone at TorqueNews, best of luck to Sam and his team as they work to make the historic run while also helping to develop future mobility devices for those who have lost the use of their arms and legs.