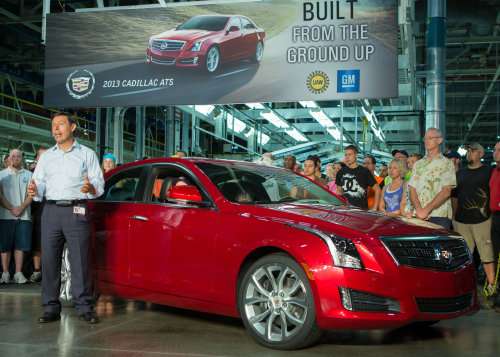 Production begins for the 2013 Cadillac ATS

Today at General Motors’ Lansing Grand River Assembly plant in Michigan, the first 2013 Cadillac ATS intended for public sale rolled off of the assembly line – marking the official beginning of the new sport sedan’s attack on the market segment dominated by the BMW 3 Series.
Advertisement

The 2013 Cadillac ATS will introduce American luxury car shoppers to a sporty, nimble new compact sedan that has been designed to compete with the BMW 3 Series, combining a fun-to-drive attitude with cutting edge luxury technologies. With a price starting just over $33,000, the new ATS is the least expensive model in the luxury brand’s lineup which, when combined with the fact that the compact sedan segment is the most popular luxury segment, should help make the new ATS a big seller.

The 2013 Cadillac ATS is the first compact sedan from the GM luxury brand since the Cimarron in the 1980s (and the first first rear wheel drive compact ever) - although General Motors expects that the new ATS will make a far bigger splash than did the Cimarron. The Cimarron was little more than a gussied-up Chevy Cavalier so it was a tough sell as a luxury vehicle but there will be no mistaking the Cadillac ATS as a supreme modern sport-luxury sedan. The company spent extensive amounts of time tuning the chassis and suspension of the ATS at tracks around the world – including the famed Nürburgring. The result is a nimble, powerful rear wheel drive compact sedan that should be able to go toe-to-toe with the BMW 3 Series and stand a very good chance of coming out on top with the help of a new turbocharged 4-cylinder engine mated to a 6-speed manual transmission along with the tried and true 3.6L V6 mated exclusively to a 6-speed automatic transmission. The ATS also features a similar high tech, high performance Magnetic Ride Control suspension that is offered on the Cadillac V-Series, the Camaro ZL1 and the Corvette ZR1.

“This is a car with a big mission, and it’s been comprehensively prepared for that mission,” said Don Butler, vice president of Cadillac Marketing. “The new-from-the-ground-up ATS creates a new entryway into the Cadillac brand for luxury car drivers, and a compelling new challenger to the status quo among the top luxury sport sedans.”

General Motors didn’t offer any information on the very first 2013 Cadillac ATS sedan but based on the images offered from GM, we can make some guesses. Based on the wheels shown in the images (available in the gallery on the right), the first ATS is either a 2.0L Turbo Premium or 3.6L Premium model as it has the machine-polished aluminum 18” wheels – unless the first car has been equipped with the optional 18” wheels from the Premium models (these wheels are available as an option on select models for $800). However, considering how much GM has talked up the new 2.0L turbocharged engine and the 6-speed manual transmission, I would guess that this powerful, efficient drivetrain was fitted in ATS #1.

The 2013 Cadillac ATS sport sedan is scheduled to arrive in US dealerships in August with exports to other markets around the world coming later this year. The massive advertising and marketing campaign for the ATS begins tomorrow during the broadcast of the 2012 Summer Olympics.

The Lansing Grand River Assembly Plant in near Michigan’s capital city employs 1,643 workers who are responsible for the current Cadillac CTS Sport Wagon, Sedan and Coupe in addition to the new 2013 Cadillac ATS. The Lansing Grand River plant also builds the high performance V-Series versions the three CTS family vehicles so it was already a busy plant when GM decided that the new ATS would be built there as well. “The new Cadillac ATS represents an investment in Lansing and our workforce,” said Tony Francavilla, Lansing regional plant manager. “A successful launch needs a great process and a great product, but at the heart of it all are the people, and the care they put into each and every vehicle.” To prepare for ATS production, General Motors invested $190 million into the plant along with adding a second shift and 600 new jobs. Should the new low-priced Cadillac ATS make the splash in the American automotive market that GM expects – Lansing Grand River could find themselves strained to keep up with the demand for two of the three bestselling Cadillac models (the other being the Cadillac SRX, which is now built in Mexico).

Elon Makes a Cybertruck Statement With an Action, But Quiet in Words
Tesla's Record Month in China: Doubled Registrations in March 2021
END_OF_DOCUMENT_TOKEN_TO_BE_REPLACED