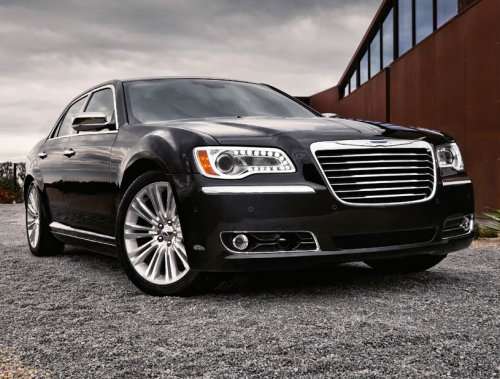 Pricing revealed for the redesigned 2011 Chrysler 300

The 2011 Chrysler 300 will make its formal debut next week at the 2011 Detroit Auto Show but today, the Chrysler Group announced pricing for the new flagship sedan, starting at just $27,995.
Advertisement

The standard 2011 300 includes items like cloth seats, 17”aluminum wheels and the jazzy new LED lights in the front and back. The 300 Limited adds leather heated seats, a rear backup camera, an Alpine premium sound system and 18” chrome wheels. The 300C includes everything that you would expect with power seats up front, heated seats in the rear, a state of the art touch screen info-tainment system, a heated leather wrapped steering wheel with real wood trim, and an long list of the usual luxury amenities. History (and rumors) would lead us to believe that there will be a high performance SRT8 trimline added to the Chrysler 300 lineup at some point with the new 392 cubic inch Hemi V8 but for now, the 2011 300 gets the four trimlines and 2 engines.

The engine found in the 2011 Chrysler 300 base and Limited (whether with or without the Luxury Group package) is the new 3.6L Pentastar V6 which offers 292 horsepower and 260lb-ft of torque in this application along with E85 compatibility. This hearty V6 is mated to a 5-speed automatic transmission available with Chrysler’s AutoStick manual shift feature and rear wheel drive.

The 2011 Chrysler 300C and 300C AWD are both powered by the 5.7L Hemi V8 packing 363 horsepower; 3 more ponies than the 2010 Chrysler 300C and 7 less horsepower than the new 2011 Dodge Charger R/T with the same 5.7L Hemi. Chrysler hasn’t stated an official torque rating for the 5.7L Hemi in the 2011 Chrysler 300 but with the 2010 models offering 360hp and 390lb-ft of torque and the new models making a few more horsepower, we can expect the torque output to be similar to the previous models. In the 2011 300C AWD, most of the features are shared with the RWD 300C, but the segment-exclusive active transfer case with a front-axle disconnect system works with Chrysler’s fuel saving technology to yield improved fuel economy over the previous models.

We should know the full story on the 2011 Chrysler 300 and 300C next week when the new flagship sedan is debuted at the 2011 Detroit Auto Show and TorqueNews.com will be there, bringing you comprehensive coverage of the North American International Auto Show.