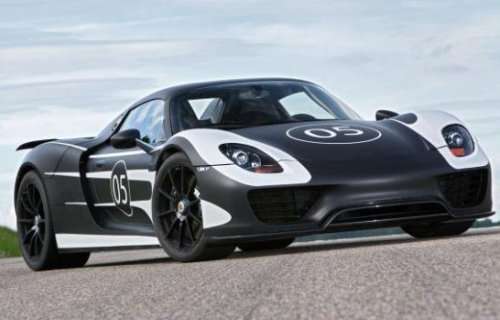 The Porsche 918 will introduce the world to the German hybrid electric supercar later this year and the innovative sports car has just gotten a step closer to production as the Stuttgart based automaker has built and launched the initial test prototypes of the new 918.
Advertisement

The 2014 Porsche 918 will be unlike any supercar ever sold around the world with a 500 horsepower 4.0 liter turbocharged engine mated to a pair of electric motors that increase the total output to 770 horsepower. One of the electric motors is mounted on the front axle to drive the front wheels while the second electric drive motor is mounted in the driveline to power the rear wheels. Thanks to the ultra lightweight carbon fiber reinforced monocoque, this high tech drivetrain is expected to allow the Porsche 918 to dash from 0-60 in just 3.1 seconds on the way to hitting a top speed of 199 miles per hour.

More importantly (to some people) is the fact that the 2014 Porsche 918 will offer all-electric driving at speeds up to a stunning 94 miles per hour while also achieving somewhere in the range of 78.4 miles per gallon when driving the car more modestly. This fuel economy number is based on the European fuel economy cycle – actual US mileage could vary based on EPA results but 78mpg in Europe shows just how amazingly efficient the 918 could be when driven with fuel economy in mind.

"What we are doing with the 918 Spyder is redefining driving fun, efficiency and performance," said Wolfgang Hatz, Member of the Executive Board Research and Development of Porsche AG. "(The electrical motors) are therefore a critical component in this vehicle into which we have put all of our expertise and capacity for innovation."

In addition to the high tech drivetrain and lightweight, the 2014 Porsche 918 will feature a adjustable aerodynamic properties, adaptive rear steering and unique upward venting exhaust pipes that surely let out a hearty roar at wide open throttle. Porsche hints that many aspects of the new 918 are a display of what the Porsche design team is capable of and we can expect cues from this hybrid supercar to show up on future (more affordable) models.

Even though the world is very familiar with the look of the Porsche 918 shown in the image on the right, Porsche has jokingly referred to the matte black and white race paint scheme “camouflage” based on the race livery of the vintage Porsche 917 race cars. This has the headlights surrounded in white that “runs” back along the sides of the car with large number placards on the doors and hood. This camo leaves little to the imagination of the 918 prototype test cars and when the new hybrid Porsche supercar arrives in dealerships late in 2013 – we can expect that they will look very similar to the prototypes, sans the matte two tone paint scheme.

The 2013 Porsche 918 will begin production in September 2013 with buyers receiving the first vehicles by the end of the 2013 calendar year. When it arrives, it will offer a combination of high performance driving and incredible fuel economy like no other vehicle sold in the world but that comes with a price. Porsche expects to charge $845,000 for these hybrid supercars and with that price; we can expect that production (and sales) figures to be relatively low.

Regardless of the price, with such incredible performance measures and the ability to hit almost 80 miles per gallon – the 2014 Porsche 918 is one hybrid that could inspire owners to want another hybrid down the road.

Check out the 2014 Porsche 918 prototypes by clicking any of the thumbnails above on the right.