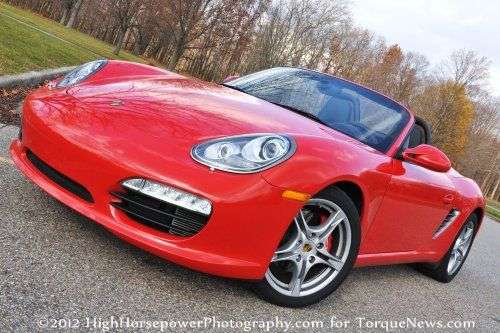 Reports from around the world indicate that Porsche is considering adding an 8th and 9th model to their lineup, possibly adding a new supercar and a sedan smaller than the Panamera sometime after the Macan compact SUV launches in 2014.
Advertisement

The Porsche lineup currently has five models – the Boxster, the Cayman, the 911, the Panamera and the Cayenne – with the new Porsche 918 hybrid supercar expected to serve as the 6th model when it arrives in the third quarter of 2013 while the upcoming Macan small SUV will become the 7th model in 2014. After the Macan arrives in 2014, there are reports that Porsche may offer a new mid-sized sedan similar in design to the Panamera that is currently known internally as the Pajun. The Stuttgart-based automaker is also considering production of “Project 960” – a two seat, mid engine coupe that would pack over 600 horsepower from a twin turbocharged V8.

Porsche originally had planned an 8th model code named Project 551, which was expected to be a smaller roadster than the Boxster but that project has been shelved as company management was concerned that the target Porsche audience would not have interest in a car smaller than the current Boxster.

There is seemingly plenty of room for a mid-engine, two-seater supercar (Project 960) in the Porsche lineup as the upcoming Porsche 918 Hybrid may not be the ideal supercar for everyone. This plug-in hybrid supercar will pack a 4.6L V8 mated to a pair of electric motors for a total output of 770 horsepower with incredible fuel economy but it will likely also come with an incredible price tag to boot. A 600+ horsepower supercar with a slightly more traditional drivetrain (like a twin turbo V8) will likely carry a lower price tag than the Porsche 918 Hybrid so it could attract more buyers – especially those who are more concerned with going fast than they are saving the world.

As for a Porsche sedan that is a bit smaller than the Panamera, that offering would likely carry a much lower MSRP than the Panamera so, much like the Boxster and Cayman serve as lead-in models for the 911 – the Pajun could serve as a way to get new customers into the Porsche brand with a smaller model. The luxury mid-sized sedan segment is heating up with the introduction of the new Cadillac ATS so a Porsche of similar size packing Panamera personality could resonate well with those looking for a luxury mid-sized sedan.

Porsche expects to be selling 200,000 vehicles a year by 2018. With 117,000 vehicles in 2011, the company had an 18% gain over their sales figures from 2010 and if that rate continues over the next five years, Porsche is well on pace to sell at least 200,000 vehicles per year in 2018. If the 18% rate continues, the company will actually sell well over 200,000 in 2018 but that will depend on their ability to introduce new higher volume models. Vehicles like the Panamera and Cayenne are popular because they are more practical than the Boxster, Cayman and 911 for the average buyer. Introducing more models that apply to more consumers – such as a mid-sized sport sedan and a compact SUV will certainly go a long way towards helping Porsche achieve their sales plans for the future.