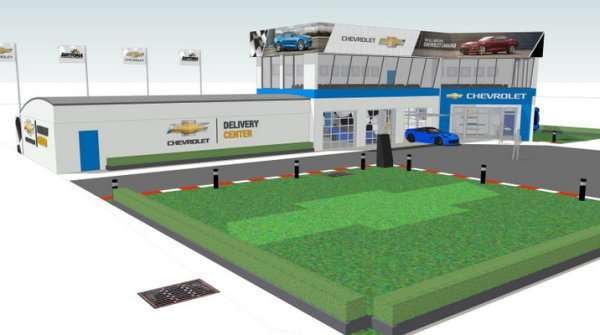 Pick Up Your Camaro or Corvette at Daytona International Speedway

General Motors has announced a new partnership with Daytona International Speedway which will allow folks who have purchased a new Chevrolet to pick it up at the legendary racing venue and while they haven’t announced the list of vehicles included in this program – safe money says that the Camaro and Corvette will be on that list.
Advertisement

If you went to your local Chevrolet dealership today and ordered a 2016 Corvette Stingray, you would have the option of paying $990 to have your new sports car “delivered” to you at the Corvette Museum in Bowling Green, Kentucky. The museum delivery process has proven to be a popular option, so General Motors has decided to expand that program to include other vehicles in the Chevrolet lineup. Also, since picking up a non-Corvette at the Corvette Museum doesn’t quite make sense, GM will use the famous confines of Daytona International Speedway for this new program.

"Chevrolet is committed to offering our customers the best overall vehicle ownership experience possible – starting with the most technologically advanced and most dynamic vehicles in the brands history," said Alan Batey, president of General Motors North America and leader of Global Chevrolet. "Beyond the vehicle, we are determined to deliver exceptional service through our dealers and unique experiences that only Chevrolet can offer, like driving your first miles in your new vehicle at the famed Daytona International Speedway."

That’s right – you can have your new Chevrolet vehicle delivered next to the same Victory Lane that hosts the winner of the Daytona 500 and after doing so, you can drive your new Chevy on the track.

Those who opt to have their new Chevrolet delivered to Daytona will get a tour of the facility, a chance to drive their new Chevy on the track, a “keepsake to commemorate the experience” and documentation that verifies that your vehicle was part of the Daytona delivery process.

Unfortunately, GM hasn’t announced which Chevrolet vehicles will be included in this program, but I would bet that the Camaro, Corvette, SS, Silverado and even the Volt will be on the list. Really, performance cars make sense, powerful trucks make sense and for the Volt – some EV buyers might like to let their new electric sedan stretch its legs on one of the world’s most famous racing surfaces.

The company also hasn’t announced the pricing, but I would expect it to be in the same ballpark as the Corvette Museum Delivery program, which costs $990.

While I expect that driving your new Chevrolet Camaro, Corvette, Silverado or Volt on the track at Daytona International Speedway – I would expect that it will come with certain rules. I don’t imagine that they are going to risk people wrecking their new vehicles, so I would expect that it will be a guided lap behind a pace car of some sort. Even with that in mind, it will be a remarkable experience for those diehard Chevy fans and NASCAR fans alike.

I think that this is a beautiful idea and a great opportunity for their customers. Kudos to GM for coming up with this unique experience.

Tesla Contemplates A New Strategy for China Retail even As Sales Boom
Jay Leno on Elon Musk & EVs: “I Think He Should Get ... Credit"
END_OF_DOCUMENT_TOKEN_TO_BE_REPLACED