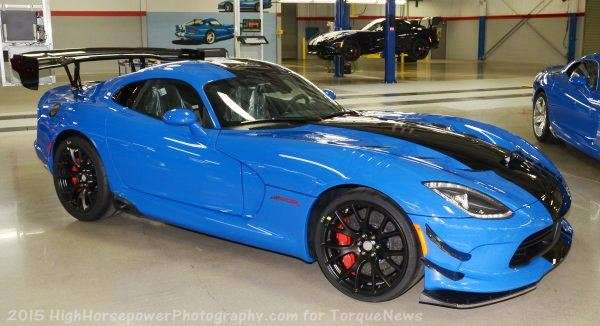 After introducing the new 2016 Dodge Viper American Club Racer last week, the Chrysler Group has begun taking orders for the most track capable street legal Viper of all time – with a price starting at $117,895.
Advertisement

Throughout the history of the Dodge Viper, the best performing models have all worn the American Club Racer nameplate and the previous generation Viper ACR left its mark on race tracks all over the world in the form of production car lap record times. As soon as the current generation Viper was introduced for the 2013 model year, fans and prospective owners were asking about a high performance ACR package – even after the track-friendly Viper Time Attack was introduced.

“Bringing our street-legal Dodge Viper ACR back is going to arm our track enthusiasts with the ultimate weapon to dominate road courses across the country,” said Tim Kuniskis, President and CEO — Dodge and SRT Brands, FCA — North America. “This is without a doubt the best Viper ACR ever. The latest in aerodynamic, braking and tire technology will ensure its legendary performance reputation around the world.”

Viper ACR Ordering
On Friday, those calls for a modern Viper ACR were answered with a gorgeous Mopar supercar that the company is calling the most track capable street car that they have ever built. Today the Chrysler Group announced that they are now taking orders for the new Viper ACR with production expected to begin sometime during the third quarter of this year. The company has also announced that the Viper ACR will carry a starting price of $117,895, which does not include gas guzzler fees or destination.

For comparison, the 2015 Dodge Viper SRT “base model” has an out-the-door price of $89,090 while the better-appointed Viper GT starts at $99,090. The best performing of the 2015 Viper models is the Time Attack 2.0, which starts at $106,090 and the Viper GTS – which comes with the most luxury to go with the high performance – starts at $112,090. In other words, the Viper ACR is the most expensive package, but when you consider the content of this package, you are getting one of the best performing cars in the world for $121,090.

What You Get for the Money
It should be noted that the 2016 Dodge Viper ACR pricing above does not include the Extreme Aero Package that will not arrive on the option list until later this year. It does include the lightweight rims wrapped in sticky Kumho Ecsta tires, the lightweight interior features, the massive Brembo Carbon Ceramic Matrix braking system and the 20-way adjustable Bilstein dampers paired with heavy duty springs. You also get the 8.4L V10 with 645 horsepower and a heavy duty 6-speed Tremec manual transmission.

Since the Extreme Aero Package is late availability, the company doesn’t need to announce the pricing for that just yet, but those folks who want to buy a new Viper ACR to go racing will likely want to wait until the high end aerodynamics package arrives. That will give those folks some time to save up, as I wouldn’t be surprised to see the Viper ACR with the Extreme Aero Package sporting a price tag upwards of $125k. However, cost aside, the biggest proving grounds for the 2016 Dodge Viper American Club Racer is the curves of the Nürburgring, where this new Viper will have to beat the times of the previous generation ACR.