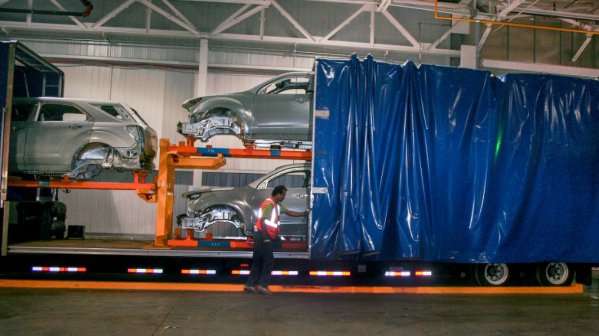 The 2016 Chevrolet Camaro will be built in Michigan and that led many to believe that the plant which built the 2010-2015 Camaro would be shut down, but General Motors has increased production of the popular Chevy Equinox crossover – giving the Oshawa plant workers hope through the 2017 calendar year.
Advertisement

Since the Chevrolet Camaro was introduced for the 2010 model year, every new GM muscle car has been built at the company’s facility in Oshawa, Ontario, Canada. However, well prior to the debut of the next generation Camaro, General Motors announced that production of their fabled muscle car would shift from Oshawa to their Lansing Grand River plant. This would allow GM to market the Camaro as being “Made in America” – which is big among muscle car owners – but it also raised some doubts as to the future of the Oshawa plant.

Rumors quickly began to surface about the Oshawa plant being shut down since the vehicle which demanded the most production time from the crew was leaving, but General Motors has announced a new investment in the Oshawa facility that will keep the crew building new Chevy, Buick and Cadillac models through 2017.

Oshawa After Camaro
Folks in the Canadian UAW were understandably concerned that moving production of the Chevrolet Camaro to Lansing Grand River would effectively kill the Oshawa plant. Although the Canadian facility also builds the previous generation Chevy Impala, the new Impala, the Cadillac XTS, the Buick Regal and the Chevy Equinox, but the Camaro while those vehicles are all also built at other facilities around North America, Oshawa was the only plant building the Camaro. With the Camaro gone, there were questions as to whether or not providing overflow assistance would be enough to keep the lights on, but a new move by GM will keep Oshawa running and their workers working through 2017.

The Oshawa production facility has two main lines – the consolidated line and the flex line. The flex line handles the overflow production of the new Impala, the Cadillac XTS and the Buick Regal – along with the 5th gen Camaro. The consolidated line builds the fleet-level Impala (previous generation) and the Chevy Equinox overflow, but the previous gen Impala is set to end in November as well.

New Life for Oshawa
While the output of the Oshawa facility will be reduced greatly when production of the 5th gen Camaro and the 2014 Impala ends later this year, General Motors has a plan to keep the facility running through the 2017 calendar year. GM will invest $9.1 million (US) into the consolidated line in Oshawa, specifically to build more Equinox SUVs over the next few years. As one of GM’s bestselling vehicles, the Equinox production increase should allow Oshawa to build enough vehicles to stay open in the short term – helping both the community around the Oshawa facility and the company as a whole.