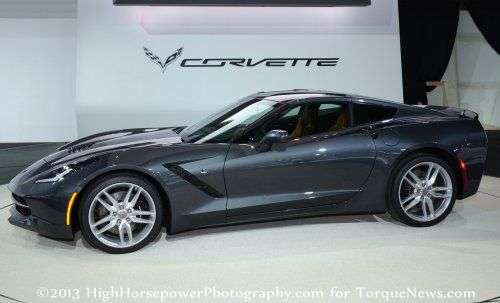 We have looked at the 2014 Chevrolet Corvette Stingray Coupe from just about every angle now including the likelihood of a future C7 Z06 and ZR1 but according to the folks at Motor Trend – there is a non-Stingray Corvette coming for 2015 that will offer a unique look, lower performance and a lower price.
Advertisement

The 2014 Chevrolet Corvette Stingray Coupe is awesome and the new 6.2L LT1 with 450 horsepower and 450lb-ft of torque, the C7 should be the fastest “base” Corvette of all time. However, this sharpened new Corvette is likely going to carry a price tag that will be out of the reach of many buyers who simply cannot afford to fork out $50k+ for a new sports car. Luckily, the folks at Motor Trend have reported that General Motors is working on a new Corvette for 2015 that will depart from the Stingray name while also having a different appearance and less power than the new C7 Stingray.

This new package is expected to be called the 2015 Chevrolet Corvette Coupe (no Stingray) and along with the removal of the Stingray badges from the front fenders, the 2015 Corvette Coupe will have a revised front fascia, fenders and rear diffuser. If I put on my wild speculation hat, I would guess that the 2015 Corvette Coupe could feature a revised front fascia that is presumably less aggressive than the Stingray, a new set of front fenders that may not have the contrasting “gills” of the Stingray and a unique rear diffuser that could feature a look with the exhaust tips moved to the outer edge of the rear end.

In addition to the new look, the 2015 Chevrolet Corvette Coupe will not pack the new 6.2L LT1 V8 – instead calling upon the new 5.3L V8 that will also serve to power the new generation of the Chevrolet Silverado and GMC Sierra. Motor Trend believes that the Corvette Coupe would have somewhere under 400 horsepower so that it would not really compete with the Chevrolet Camaro SS in terms of power.

Pricing has not been announced for the 2014 Chevrolet Corvette Stingray Coupe but considering that the C6 (current) Chevy Corvette “base” Coupe carries a starting price of $50,595, the C7 Stingray with more power, better fuel economy, an all new chassis and high tech gadgets inside and out – we can expect that the 2014 Corvette Stingray Coupe will start at least in the mid $50k range. Figuring that a nicely equipped Camaro 2SS with a manual transmission costs just over $40,000, the non-Stingray entry level Corvette could come with a price of $45,000 to 48,000 and still leave plenty of room for the Camaro SS while offering a significant price drop from that of the new Stingray Coupe.

The problem with this possible non-Stingray, entry level 2015 Corvette is that there would be some obvious overlap in terms of performance with the Camaro SS. While the sub-400 horsepower Corvette would have less power than the Camaro SS - which has 400hp with the automatic transmission, 426hp with the manual gearbox – the lightweight chassis and body of the C7 would like allow this entry level Corvette to compete with the Camaro even while having less power under the hood. Also, while the Camaro and Corvette are both sports cars, the new non-Stingray C7 could offer the 2-seater Corvette experience with more emphasis on handling while the Camaro SS takes care of the lust for bigger power.

Unfortunately, there has been no official word from General Motors on the existence of a 2015 non-Stingray C7 Corvette Coupe but there had been other rumors that the company was working on a lower priced 2-seat sports car. Perhaps that low price sports car wasn’t a unique vehicle but rather – it will be the non-Stingray Corvette. The 2014 Chevrolet Corvette Stingray Convertible is set to debut next month at the 2013 Geneva Motor Show and after that, the company will likely give the Stingray some time to attract buyers before launching the less expensive model. Of course, there is also the possibility that the lower priced, lower performance Corvette does not exist but there is no question that the base C7 Corvette suggested by Motor Trend would certainly attract a great many buyers.

Some of our readers critique us for discussing unsubstantiated rumors by other publications but there is no denying that the lower performance Corvette is a spicy idea - one that was too good for us to pass up.