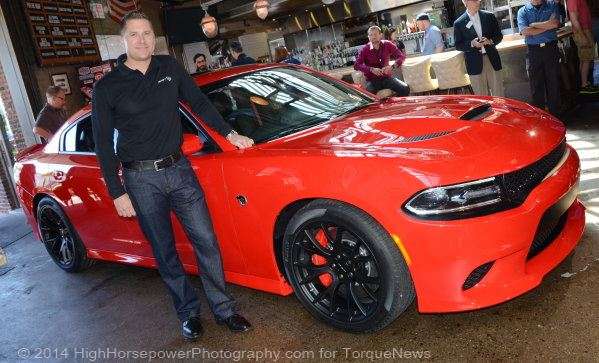 No Hellcat, Charger or Challenger for Europe

We were so busy drooling over the fact that the 2015 Dodge Charger SRT Hellcat is the world’s most powerful sport sedan at the recent media debut that we forgot to mention one piece of very disappointing news – neither the Hellcat powered Challenger or Charger will be offered in Europe.
Advertisement

During the recent media debut of the 2015 Dodge Charger SRT Hellcat, Dodge brand CEO Tim Kuniskis (shown above with the Hellcat Charger) was asked about the possibilities of seeing the 707hp sedan in Europe and the Dodge boss was quick to reply with some bad news for American gearheads living in Europe – the Hellcat Charger won’t be marketed there. This shouldn’t come as a huge surprise to anyone, but no one likes to hear that a certain region won’t get to bask in the warm glow of the Hellcat’s monster output. I wouldn’t expect to see the 707hp Challenger either after hearing that the Hellcat Charger wouldn’t be sold in Europe, but a new report suggests that Europeans won’t be able to buy any of the stylish new 2015 Charger or Challenger models.

The folks at InAutoNews.com reached out to the Chrysler Group and learned that not only would the SRT Hellcat versions of the 2015 Dodge Charger and Dodge Challenger unavailable in Europe – but the non-SRT models will also not be offered by European dealerships. In other words, whether someone living in Europe wants a Charger SXT powered by the Pentastar V6 or the Challenger SRT Hellcat with the blown V8, they will have to pay big money to have them imported.

No Hellcat is not Surprising, No Challenger Is
Considering the tougher emission level and fuel economy standards in Europe, it doesn’t come as much of a shock that the Hellcat Hemi-powered versions of the 2015 Challenger SRT and Charger SRT won’t be offered overseas, but I am a bit surprised to hear that neither of these cars will be offered at all. The full sized Dodge Charger sedan might not be a big seller in the frugal European market, but with both the Ford Mustang and Chevrolet Camaro looking to do battle in Europe – I’m surprised to hear that Dodge won’t ship the Challenger over there…at least in limited numbers.

The Dodge Challenger is the biggest of the three American muscle cars, but the base model with the Pentastar V6 and the 8-speed TorqueFlite automatic transmission is one of the most efficient performance models sold in America. Unfortunately, neither of the V6 versions of the Camaro or Mustang are sold in Europe with only the Camaro SS sold currently and soon, the 2015 Mustang will be available with either the new 2.3L EcoBoost 4-cylinder or the 5.0L V8. The 5.7L Hemi is also quite competitive with both the Camaro SS and Mustang GT in terms of fuel economy, but it trails quite a bit in the power department so when combined with the bigger size, perhaps the Challenger doesn’t have the same allure to European buyers as the other American muscle cars.

Hellcat Hemi Models Reserved for the US, Canada and Mexico
While it is bad news for the folks in Europe, this is good news for anyone in the USA, Canada or Mexico who is hoping to purchase one of the Hellcat powered 2015 Challenger or Charger models. Dodge boss Tim Kuniskis has made it quite clear that there is no set production limit for either of the 707hp Mopar muscle cars, but these monster power models will be limited by the company’s ability to only build so many examples of the Hellcat Hemi. The fact that none will be exported outside of North American means that it should be a little easier for American, Canadian and Mexican buyers to line up their own 707 horsepower muscle car.