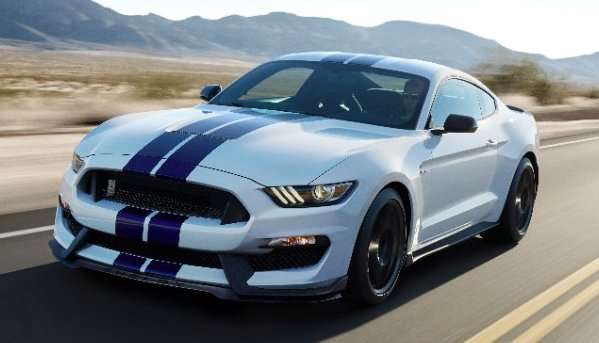 Ford made a big splash when they introduced the 662hp Shelby GT500 Mustang Convertible a few years back, but those folks hoping for a drop top version of the new Shelby GT350 Mustang shouldn’t get their hopes up – as the world on the street is that Ford has no plans to produce a new GT350 convertible.
Advertisement

The new Ford Shelby GT350 Mustang is expected to assert itself as the best handling Mustang of all time while also being the most track capable Mustang of all time. While the power output will likely be well below that of the previous generation GT500 Mustang that packed 662 incredible supercharged horsepower, the new Shelby GT350 is designed to be an all-around performer rather than just a big power, straight line monster. The GT350 should be able to go fender to fender with any stock muscle car ever, with the biggest challenge likely coming from the Camaro Z/28 – which is little more than a street legal race car.

While the new Shelby GT350 Mustang looks great inside and out, form follows function so shy of the basic niceties that you find in the sporty cockpit, you won’t find many aspects of the GT350 that don’t have a positive impact on performance. Sadly, this means that you won’t see a convertible version, as there is no way for Ford to cut the roof off of the new Shelby Mustang without hindering performance.

The Disadvantages of a GT350 Convertible
The Ford Shelby GT350 Mustang was designed to be the ultimate track competitor so in addition to the flat plane V8 engine, the huge braking system and the track tuned suspension setup, the new Shelby Mustang has a very stiff chassis. The roof is a big part of the structural rigidity of most unibody cars, including the 2015 Mustang. When you cut the roof off of the new Mustang, you are greatly diminishing the chassis rigidity. Of course, you can regain this structural rigidity by adding extra reinforcements through the floor and doors, but those reinforcements often add more weight than the roof components of the coupe and that is why a convertible with a cloth top generally weighs more than the coupe counterpart.

These weight disadvantages are why Ford likely won’t be building a Shelby GT350 Mustang convertible, as the resulting topless sports car wouldn’t be able to achieve the same level of road handling performance as the coupe that debuted in LA. This is the same reason why there is no Camaro Z/28 convertible and until GM rolls out a super-handling Camaro convertible, I wouldn’t expect Ford to offer up a drop top GT350 of their own.

A Convertible is Unlikely, not Impossible
While these weight issues make a Ford Shelby GT350 Mustang Convertible unlikely any time soon, it is not impossible. It is very possible to design a car that can offer incredible structural rigidity without a fixed roof and the new Corvette Z06 Convertible is a great example of that. However, building a high performance car with the same chassis stiffness in both coupe and convertible form needs to begin during the earliest stages of the design process. Cars like the new Z06 was designed from the ground up with the plans of having an ultra high performance convertible, so the chassis has been designed to yield the best possible stiffness without the support of a roof. This is also why all of the new Corvettes come with a removable roof panel – as the car was basically engineered to be awesome without a roof.

On the other hand the 2015 Ford Mustang chassis requires some extra reinforcements through the doors and undercarriage to obtain the same level of chassis stiffness so cutting the roof off of this new Shelby GT350 Mustang would negatively impact the performance by a severe enough margin that Ford wont bother building them. However, I still expect some kind of premium performance Mustang to arrive in the next few years – it just might not be called the Shelby GT350.

LG's New EV Battery Plant Is a Welcome News for Tesla
Tesla Giga Berlin's New Hurdle: It's Not Only the Gov't, but Now Tesla Itself
END_OF_DOCUMENT_TOKEN_TO_BE_REPLACED