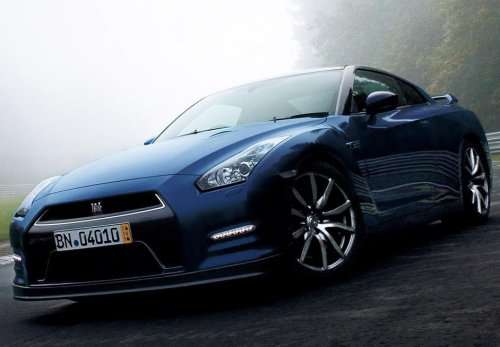 Sources indicate that Nissan will soon be heading back to the Nürburgring with the 2014 Nissan GT-R supercar to see if they can set the new standard for production cars currently held by the 2010 Dodge Viper SRT10 ACR – a feat that would require Nissan to shave some six seconds from the 2013 GT-R’s previous best.
Advertisement

While the average motorist couldn’t care any less which cars are fastest around the famed Nürburgring Nordschleife track in Germany, this massive road course has become the top track in the world for a sports car to show how it sizes up against both other modern cars along with those from the past so it is very important to the Japanese automaker for the 2014 Nissan GT-R to set the new production car record. There has been no official time for the new 2014 GT-R thus far but in internal company testing, the newest version of the GT-R ran a lap time of 7 minutes and 18.6 seconds. While unofficial, that time puts the 2014 GT-R roughly 6 seconds back o the 7:12.13 by the 2010 Dodge Viper SRT10 ACR and about 4 seconds behind the Porsche 918 Hybrid super (that time is also unofficial), so the Nissan will have some serious work to do if they want to push the 2014 GT-R into the 7:11 range.

The unofficial lap time of 7:18.6 for the 2014 Nissan GT-R is 8.1 seconds quicker than the 2009 GT-S lapped the Nürburgring and that improved performance comes via high output fuel injectors that allow for better throttle response and stronger acceleration at high RPM, revised turbochargers that broaden the powerband of the twin turbocharged V6 and a revised oiling system – although the actual power output remains at the same 545hp and 463lb-ft of torque as the current GT-R.

Where the more significant changes to the 2014 Nissan GT-R come into play is in the handling capabilities, where Nissan has added new front shocks and stabilizers, new suspension bushings and a new set of tires. Also, the 2014 GT-R is fitted with chassis reinforcements in the dash that improve chassis rigidity and suspension performance.

Nissan proclaimed their intent to head back to the Nürburgring for a new production road car record with a specially prepared Nissan GT-R Track Edition that features a stripped out interior, a racing bucket seat with a race harness, a roll cage and a set of Dunlop racing slick tires. While this lightweight GT-R Track Edition is based on a standard production version right down to the 545hp VR38DETT engine but since it has non-street legal tires, it will not be considered on the same level as the Dodge Viper SRT10 ACR, the Chevrolet Corvette ZR1 or the Porsche 918 Hybrid. Nissan claims that the new GT-R Track Edition is capable of lapping “the Ring” in less than 7 minutes – a time which would put it into some incredible company including the Pagani Zonda R (non-street legal), the Ferrari 599XX (non-street legal) and the Radical street legal race cars which are just barely a road car and really shouldn’t be considered for the production road car record.

However, Nissan is quick to point out that when they head back to Germany to take a crack at the production car record around the famous Nürburgring, they will be using a full production model and not the ultra lightweight Track Edition that was present for the announcement in Japan. Unfortunately, considering the fact that winter is now upon the Nürburgring, it could be a few months before the 2014 Nissan GT-R takes to the 12.9 mile long German road course.

LG's New EV Battery Plant Is a Welcome News for Tesla
Tesla Giga Berlin's New Hurdle: It's Not Only the Gov't, but Now Tesla Itself
END_OF_DOCUMENT_TOKEN_TO_BE_REPLACED