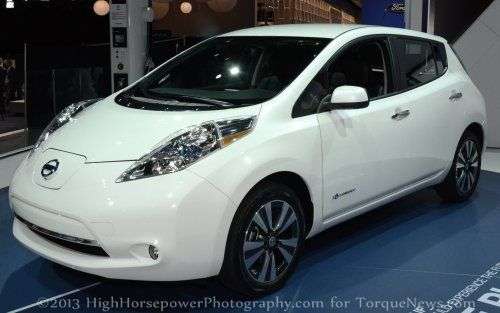 The Nissan Leaf beat the Chevrolet Volt to lead the electric vehicle market for the third month in a row but more importantly, this string of strong months for the Leaf has allowed the all-electric Japanese hatchback to claim the top spot in EV sales for the 2013 calendar year – a position that it has not held in over a year.
Advertisement

The Nissan Leaf had one of its strongest months ever in May 2013, sending out 2,138 units to happy new EV owners around the United States. This figure is just 98 vehicles less than the monthly sales record from March 2013 and May 2013 brought about a massive increase over the same month in 2012 when just 510 copies of the Leaf reached buyers in the US. This strong month allowed Nissan to claim the monthly EV sales title for the third straight month but more importantly with a total of 7,614 Leaf EVs sold this year, the Leaf leads the Chevrolet Volt in annual sales for 2013. Nissan sold just 2,613 Leaf EVs in the first five months of 2012 so the all electric Nissan is off to a much better start in 2013 with a current average that could lead to roughly 18,200 units throughout the year.

This marks the first time that the Leaf has held an annual sales lead since the first month of 2012 when Nissan sold 676 Leafs to Chevy’s 603 Volts. After January 2012, GM sold enough Volts every month to comfortably hold the segment sales lead throughout 2012 and through the first five months of 2013. However, with the Leaf beating the Volt each of the past three months, Nissan can once again brag that they offer America’s bestselling electric vehicle.

The Chevrolet Volt moved just 1,607 units in May 2013 and while that is only a slight decline from the 1,680 Volts sold in May of last year, the spike in Leaf sales forced GM to settle for second in American EV sales once again. Surprisingly, even with the slow sales of the Volt through the first five months of 2013, the Volt is still doing better than it was at this point last year when just 7,057 units were sold compared to this year’s current total of 7,157 units sold. All sales growth is good but with Nissan Leaf sales growing much more rapidly than the Chevrolet Volt – GM will have to hope for some strong summer and fall months to grab the 2013 EV sales title.

The good news for General Motors is that we are heading into the months that proved to be the best for the Chevrolet Volt each of the past two years. The Volt saw a massive spike in sales in August 2012 after a steady incline through the summer months and if the Volt can repeat that pattern this year – GM will stand a much better chance of grabbing their second straight EV sales title.

I should once again point out that the rumored sales figures of the Tesla Model S would technically make it the bestselling electric vehicle in the US market but until Tesla is willing to state sales figures in the same orderly fashion as the rest of the automakers doing business in America – their high performance, high luxury EV will have to settle for a note at the end of our monthly EV sales feature. Tesla claims to be moving around 2,000 Model S units per month so while their sales figures may not be enough to claim the monthly title for May, they would certainly be enough to be included in this conversation. However, since we only have quarterly reports and unofficial figures on which to base Tesla’s sales, the Nissan Leaf currently gets to sit atop the EV segment.

LG's New EV Battery Plant Is a Welcome News for Tesla
Tesla Giga Berlin's New Hurdle: It's Not Only the Gov't, but Now Tesla Itself
END_OF_DOCUMENT_TOKEN_TO_BE_REPLACED