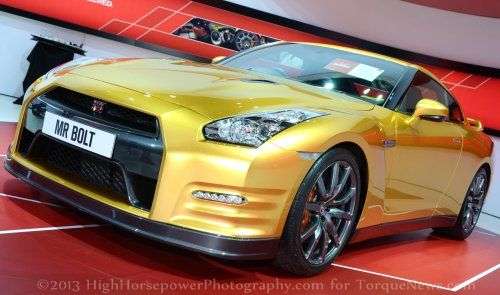 The 2014 Nissan GT-R will follow in the footsteps of the previous model years with mild performance increases accompanied massive price increases – this time with a base price that will top $100,000 for the first time once the destination fee is factored into the final price.
Advertisement

The 2014 Nissan GT-R supercar carries a base price of $99,590, which accounts for an increase of $2,770 over the 2014 price. While the MSRP is technically under $100k, that does not include destination charges so provided that those additional (and unavoidable) fees are more than $410 (destination if $1,000 for the 2013 GT-R), the least expensive package will put your final price tag in the 6 figure range. The premium 2014 Nissan GT-R Black Edition also gets a price hike of its own with the new top of the line package ringing up $2,980 higher than 2013 for a total price of $109,300. This price increase will likely draw criticism from the same people who have complained every time the price for the GT-R went up over the past 5 years but as was the case with the previous model years’ vehicles – the 2014 models receive modifications to help make this Japanese supercar even more super.

The 2014 Nissan GT-R is powered by the same 3.8L twin turbocharged V sending out 545 horsepower and 463lb-ft of torque to all four wheels via a 6-speed dual clutch transmission and the Nissan Attesa E-TS advanced all wheel drive system. Nothing has changed with the drivetrain or its output for 2014 but the newest GT-R has improved throttle control that Nissan promises will enhance mid and upper range responsiveness. More importantly, the 2014 GT-R receives new shocks, new springs, a new front anti-roll bar and a more rigid chassis for a lower center of gravity and improved handling – particularly at higher speeds while maintaining a smooth, comfortable ride. Both the “base” 2014 GT-R and the GT-R Black Edition benefit from these changes. The base 2014 Nissan GT-R receives a unique Premium Interior Package which includes hand stitched Amber Red leather appointments on the front seats.

While the Nissan GT-R has been gradually improved upon each year since being introduced in 2008, the price has increase a tremendous amount during these 7 model years. When the GT-R was introduced in the US in 2008, it had a base price of $69,850 so with this year’s base price of $99,590 – the GT-R has increased by almost $30,000 in 6 years. This marks an increase of 42% since being launched in the US and for a vehicle that has seen only minor changes, it is a fairly steep rate of increase. The other side of the coin is that while the GT-R has topped $100,000 out the door, it can still outperform a great many supercars available around the world that have a much higher price tag. Based on the fact that the GT-R will comfortably go head to head with some of the most expensive Italian supercars available today, the GT-R is still a heck of a bargain..or it is as much of a bargain as you can want from a sports car with a 6 figure price tag.