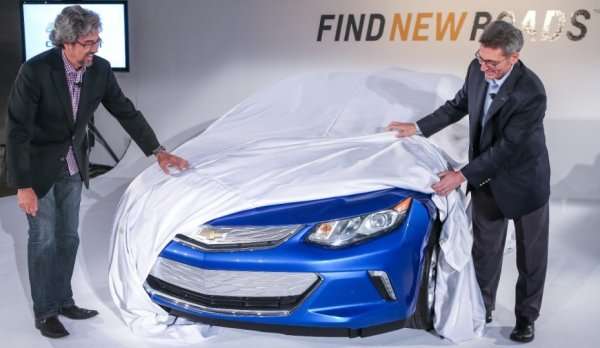 Next Gen Chevy Volt Takes Design Cues from the Corvette

While General Motors has rolled out a collection of short videos teasing the next generation Chevrolet Volt, the most intriguing aspect of the new electric Chevy is the fact that it should wear design cues borrowed from the popular Chevrolet Corvette Stingray.
Advertisement

The Chevrolet Corvette Stingray and the Chevrolet Volt are obviously two very different vehicles and although they are both fuel economy front-runners in their respective segments, these two cars appeal to the interests of two very different groups of people. Even with that in mind, General Motors execs believe that applying some design cues from the ultra-hot selling Stingray will appeal to those buyers considering the next gen Volt and with the 2015 North American International Auto Show in Detroit – we will only have to wait 13 days to see just how much Corvette inspiration went into the new electric sedan.

The Next Generation Volt Design
The image above showing the nose of the next generation Chevrolet Volt has been the best look that we have gotten at the new model thus far, but in speaking with GM exec ED Welburn, Automotive News got an interesting bit of insight on the design of the next gen Volt. Welburn didn’t provide any exact details, but he explained that some exterior aspects of the Corvette Stingray will be applied to other Chevrolet models, including the Malibu, the Cruze and the new Volt. Welburn also stated that the aspects which would be translated to other models included the segmented design of the hood and the rectangular taillights.

While I certainly don’t expect to see the actual Corvette Stingray taillights fitted into the rear end of the next gen Volt, I would expect the basic rectangular design to arrive on the Volt. The unique aspect of the Corvette lights that I would not expect to see on the electric Chevy is the outer edge that “runs” down along the outer body lines a bit. That just wouldn’t fit on a car like the Volt in my opinion, but if you were to crop the Stingray taillights into a straight rectangle, I believe that we could see something similar on the 2016 Volt.

As for the hood, I expect that the Corvette Stingray inspired hood design of the Volt will be far more suggestive. The hoods of the Stingray and the Volt are nothing alike, so it would be hard to apply the look of the Vette hood to the Volt. However, the segmented design of the Corvette’s bonnet could be transferred to the electric sedan, just in smaller scale.

More Range, Improved Driving Dynamics
in addition to having a sharp new exterior design that will likely be more attractive in a traditional way than the current Volt, the next generation electric Chevy sedan is promised to have a greater electric range, a greater overall range and improved driving dynamics. Also, the steering wheel mounted regenerative braking control paddles from the Cadillac ELR will be included on the 2016 Volt, giving drivers the chance to practice eco-friendly one-pedal driving. The paddles allow the driver to engage the regenerative braking system without pushing the brake pedal, which slows down the car a bit while also helping to channel more energy from the brakes to the battery system. This is a great feature on the ELR and it will almost certainly be a popular addition to the next generation Volt.

The 2016 Chevrolet Volt will make its world debut in two weeks at the 2015 North American International Auto Show in Detroit’s Cobo Hall, but if any more information on the next gen Volt surfaces before then – you will find it here on TorqueNews.com.