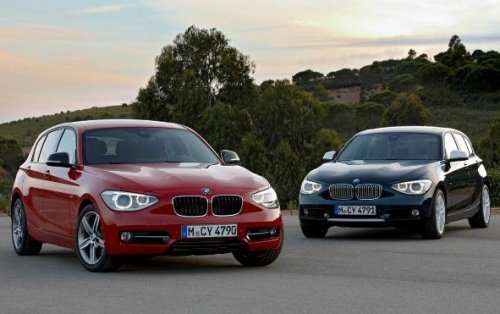 Since the 2013 BMW 1-Series was introduced last summer as a sporty 5-door hatachback, many have speculated that the 2-door version of this car would become the new BMW 2-Series – speculation that has received some support from Car magazine, who has announced that the next generation BMW compact convertible is under development now and it will debut as the new 2-Series for the 2014 model year.
Advertisement

The BMW 1-Series will carry a new front end design (shown in the gallery thumbnails on the right, click to enlarge) with a new 5-door design taking the place of the coupe and convertible available as 2012 model year 1-Series vehicles. When the 2013 1-Series designed debuted last year, it became a common expectation that the 2-door models sporting this new look would bring about the introduction of the new BMW 2-Series and according to Car, the 2014 BMW 2-Series will debut as a convertible. This comes to Car from sources inside of BMW.

The 2014 BMW 2-Series Convertible will likely ride on the same platform as the 2013 BMW 1-Series and we can expect that at least some of the drivetrain options (if not all) will be shared as well. The most noticeable difference between the two will be the slightly smaller overall dimensions and the difference in swapping from a 5-door hatchback to a 2-door convertible. This will include some slightly different taillights, a new rear interior layout and – of course – a trunk instead of the cargo area of a hatch. Luckily, the shape of the taillights might work well with a sweeping trunkline broken up by an integrated rear spoiler.

If the BMW 2-Series does indeed debut for the 2014 model year as a convertible, we would expect to see a hard topped coupe version – lest BMW go the route of other retractable hardtop models and make the 2-Series a coupe with a hard removable roof. That sounds cool but those are often heavy, hindering performance in a variety of ways and vastly diminishing cargo space.

We should also keep in mind that BMW has trademarked the M2 name after announcing that the BMW 1 Series M Coupe would only be built for one year. At first, we were all disappointed that the awesome entry level M sports car would be gone after a year but instead, it looks like there is a good chance that the same basic design could exist under the name M2. BMW used the name 1-Series M Coupe for the recent compact sports car to pay homage to the incredible BMW M1 supercar of the late 1970s. Should the new compact 2-door sports car be based on the 2014 BMW 2-Series, it somewhat confirms that there is a new high performance model coming that follows in the traditional naming process of the M high performance lineup with the 2014 M2.

In addition to the 2-door version of the BMW 1-Series shifting to the new 2-Series nameplate, it is expected that the 2-door versions of the BMW 3-Series architecture will also receive a new name with the introduction of the BMW 4-Series. That portion is still speculation but should the topless compact BMW meet the world as the 2014 BMW 2-Series; it will add an extra measure of support to the future existence of a BMW 4-Series. Following in the same train of thought for the BMW M2, many speculate that the future high performance coupe models based on the BMW 3-Series sedans will carry the name M4.

In any case, with a likely model year of 2014 for the new BMW 2-Series, the company should be introducing this new model within the next 6 to 8 months.