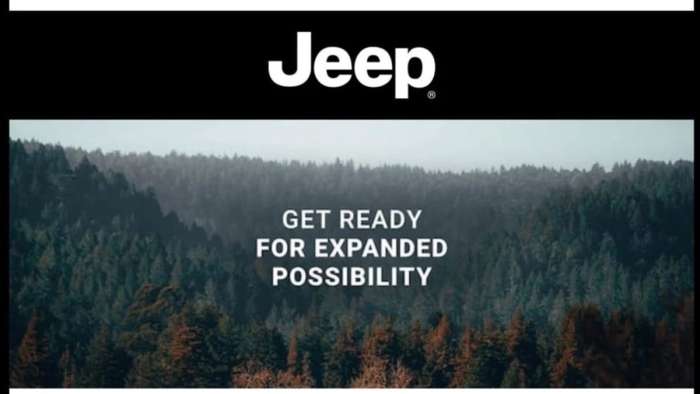 Jeep emailed select customers to tell them that the “most awarded SUV ever” would be getting a third row of seats, undoubtedly referring to the new larger Grand Cherokee with three rows of seats.
Advertisement

Over the past few years, reports citing inside informants have claimed that the Jeep brand is working on a Grand Cherokee with three rows of seats. The popular SUV has always been a two-row model, but based on an email received this morning by select Jeep customers, the three-row version will soon arrive. In fact, the email suggests that this big news will be announced on Thursday, January 7th.

Big Jeep News
The image shown below was posted to a Facebook Trackhawk group by Scott from the JeepGarage.org. This image was the entire body of the email from Jeep and no other information was included. However, the email had everything needed to lead us to believe that a larger Grand Cherokee is on the way.

While the email does not actually say that Jeep is introducing a three-row Grand Cherokee, the email does reference the “most awarded SUV ever”. The most awarded SUV ever is the Jeep Grand Cherokee, so there is no doubt that it is the vehicle in question. The email also doesn’t specifically state that the big Jeep is getting a third row of seats, but what else could it be getting a third row of? Coupled with the reports of a three-row Grand Cherokee coming down the pipeline, our safe money says that the January 7th Jeep news will pertain to a Grand Cherokee with extra seating space. 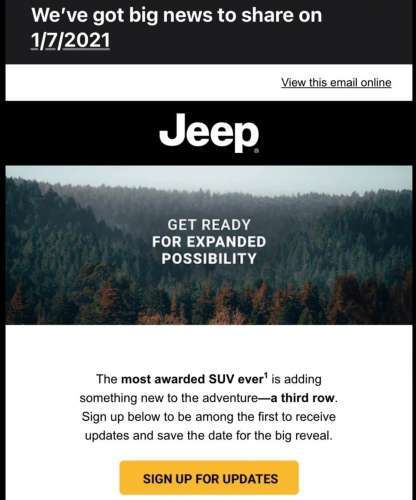 New Interior Tech
Finally, the odds are good that the new three-row Grand Cherokee will have the new infotainment system from the 2021 Dodge Durango. The Durango has a new 10-inch screen while the current Jeep still has the 8.4-inch system. We would expect that the new Grand Cherokee will get the new infotainment screen along with some other freshening-up throughout the cabin.

Don’t expect this to be as simple as today’s Grand Cherokee with an extra row of seats; this Jeep is likely to be an all-new model, with a two-row version coming in the next year or so.
We will know more come Thursday, when Jeep announces their big news.