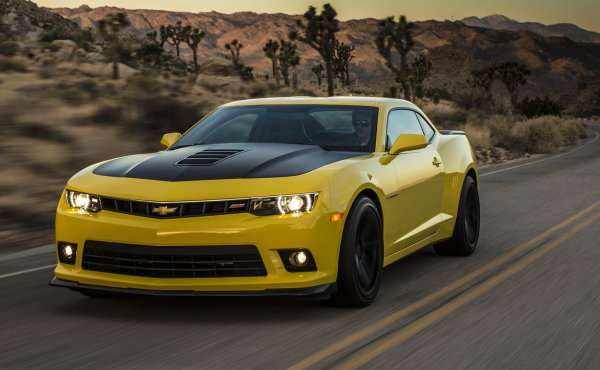 Back in late 2013, we talked about a quote from Chevrolet Camaro Chief Engineer Al Oppenheiser that there would not be a 4-cylinder option in the 2016 Camaro, but new rumors from around the automotive media suggest that the company might actually offer a turbocharger 4-cylinder similar to the 2.3L EcoBoost that will power the 2015 Ford Mustang.
Advertisement

Now, I should start by explaining that I am still inclined to believe the comments of Camaro Chief Engineer Al Oppenheiser with regard to a 4-cylinder engine in the 2016 Chevrolet Camaro. He is responsible for every aspect of the Camaro so if he says that there will never be a 4-cylinder Camaro while he is in charge – I believe him. However, I would be remiss if I didn’t address the increasing number of reports that insist that the next generation Camaro will indeed pack a turbocharged 4-cylinder engine that will compete with the 2015 Ford Mustang EcoBoost.

Cadillac Chassis and Cadillac Power
The 2016 Chevrolet Camaro will ride on the same General Motors Alpha platform that underpins both the Cadillac ATS and CTS, and the next generation GM muscle car will actually use the larger version of that platform from the CTS rather than the smaller version that is used for the ATS Coupe. Even with the longer wheelbase, the 2016 Camaro is expected to lose at least a few pounds so it could finally challenge the Ford Mustang in terms of curb weight.

In addition to sharing a chassis with the hot selling Cadillacs, these new reports suggest that the 2016 Camaro will feature some variation of the turbocharged 2.0L 4-cylinder engine that is currently at work in the Caddy lineup. This mill offers 272 horsepower and 295lb-ft of torque in the ATS so to really work in the Camaro, GM will need to bump up the output a bit. Figure that the 2.3L Ford Mustang EcoBoost engine is promised to pack at least 305 horsepower and 300lb-ft of torque so if GM could increase the horsepower up to 305-310, it would likely also offer more torque than Ford’s newest EcoBoost engine.

Interestingly, unlike the 2015 Ford Mustang EcoBoost which is a step up over the base model V6, the 2016 Chevrolet Camaro turbocharged 4-cylinder model may be a base model. The current 3.6L V6 in the 2014 Camaro offers 323 horsepower and 278lb-ft of torque so while the turbo 4 would have a big advantage in torque, it may lack the horsepower to compete in the consumers’ eyes with the V6. Fortunately, the fact that the Camaro SS might be getting a big jump in power thanks to the introduction of the new LT1 V8, perhaps GM could come up with a larger version of the Cadillac turbo 4 that would offer tons more power than the current base V6 – and Ford’s 2.3L EcoBoost.

Global Impact is a Big Deal
While introducing a 2016 Chevrolet Camaro will a fuel efficient yet still powerful turbocharged 4-cylinder engine would have obvious advantages here in the US market, the impact overseas would likely be much greater. The current Camaro has been offered in select overseas countries for a few years now, but what we know as the Camaro SS is simply known as the Camaro in Europe. This is because European buyers don’t get to pick between the V6 and V8 – they just get the V8 and that is that.

Only being able to buy what amounts of our Chevrolet Camaro SS doesn’t seem like a problem for many American buyers, but this causes the “base” price of the European Camaro to be much higher while also bringing about concerns of both fuel economy and engine emissions. These factors played a big role in Ford’s decision to introduce the new 2.3L EcoBoost for the European market as those buyers who want the look of the American muscle car without the performance – and with far greater efficiency figures – to have a more reasonable (and more affordable) option. The Camaro has long been unchallenged in the European market, but Ford will introduce the next generation Mustang in a big way with both the powerful V8 and the more eco friendly EcoBoost. It seems unlikely that GM wouldn’t try to counter the Mustang’s new EcoBoost engine with a turbo 4 of their own – and they already have a very good engine at work in the Cadillac lineup.

Again, we should be reminded that while none of this turbo-4 talk pertaining to the 2016 Chevrolet Camaro is official in any way, the comment about there never being a 4-cylinder Camaro in his time seems to be about as close to official as you can get. I am still inclined to lean towards the comments made by Oppenheiser last November, but you never know how things will change in the fast paced automotive world.

By the way, I wanted to be clear that the yellow 2015 Chevrolet Camaro 1LE has no correlation to the possibility of a 4-cylinder Camaro – it is just an awesome picture of the GM muscle car.
Source: Automobile via CarScoops