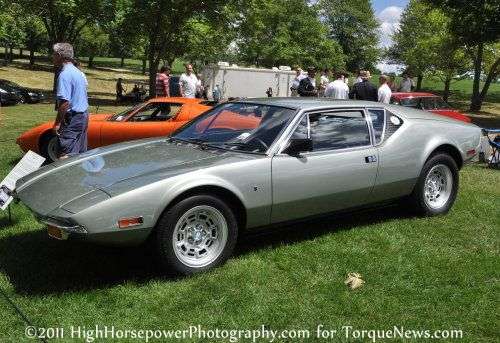 New DeTomaso Pantera could debut at the 2011 LA Auto Show

When the 2011 Geneva Motor Show opened last week, the world was re-introduced to the DeTomaso brand and while the new Deauville Sport Luxury Sedan is a far cry from the well-known DeTomaso Pantera, rumors suggest that a new DeTomaso sports car could debut at the 2011 LA Auto Show.
Advertisement

According to PistonHeads, the new DeTomaso Pantera is set to debut at the 2011 Los Angeles Auto Show in November but little else is known about the new upcoming DeTomaso sports car. The new Pantera is expected to be the second vehicle in company’s new three-model lineup that will also feature a limousine sometime in 2012.

For those unfamiliar with the original DeTomaso Pantera, it was an Italian-built sports car designed by American designer Tom Tjaarda. It was introduced (in the US) at the 1970 New York Motor Show and when it hit the US markets in 1971, it was being imported by Ford Motor Company and sold at Lincoln-Mercury dealerships. Depending on the model year, the DeTomaso Pantera was powered by a variety of different Ford V8 engines and with the mid-engine design was fairly unique in the US market – making the Pantera popular at first with celebrities like Elvis Presley owning one. However, a variety of quality control issues combined with corrosion problems quickly gave the DeTomaso sports cars a bad rep and by 1975, they were no longer being imported by Ford.

We can only imagine that if the modern DeTomaso brand wishes to capitalize on the features of the original Pantera that made it popular, they will stick with a monocoque design with a mid-engine/rear wheel drive configuration. The original Pantera was Ford-powered and essentially marketed as a Ford product but the new DeTomaso Deauville sedan that debuted at the Geneva Motor Show is essentially a Cadillac SRX crossover with a vastly different body, going so far as to share interior features and the 2.8L turbocharged GM V6. With the modern DeTomaso company seemingly being so involved with General Motors, we could surmise that the new Pantera would not be so reliant on Ford powerplants...so what motor will be tucked behind the seats to give this modern sports car the power that it deserves?

Thinking optimistically, I can imagine a new DeTomaso Pantera with a general shape similar to the original but with the proper curves added here and there to give is a more modern look. Quality issues aside, the original Pantera was a supercar by the standards of those days and the modern Pantera could use carbon fiber to create a monocoque design similar to the original and with the apparent GM involvement in the Deauville, perhaps we could expect a little help from the Cadillac brand under the hood? Rumors have suggested that the new DeTomaso company has a 550 horsepower V8 in the works – perhaps a derivative of the Cadillac V-Series supercharged LSA offering slightly less power than the high performance Caddies, but still plenty of oomph for the ultra-light midship Pantera. The other possibility could be a tuned version of the LS7 V8 found in the 2011 Corvette Z06, which would also provide plenty of power for the new Pantera.

Again, this is all just dreaming based on rumors over the past few months and with the 2011 LA Auto Show quite a ways off, it could be a while before anything concrete is announced about the new DeTomaso Pantera but one thing is for sure – with a little more help from GM, the new Pantera could definitely help to improve the reputation of the original while making for one awesome new supercar.

Click here for a closer look at the DeTomaso Deauville.