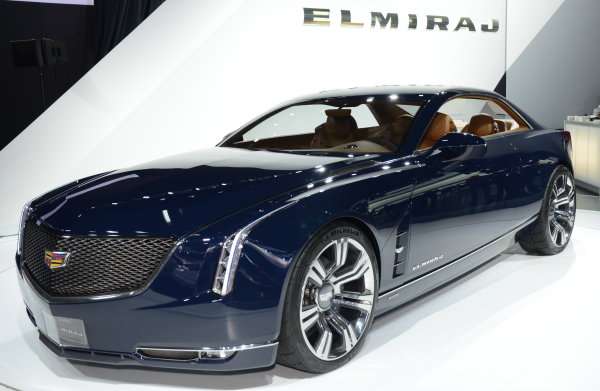 We have known for some time now that the Cadillac brand would introduced a new premium luxury sedan at the 2015 North American International Auto Show in Detroit and today, General Motors announced that the new range topping Caddy sedan would be named the CT6 – bringing with it a new naming system that will spread across the entire brand.
Advertisement

We have known for quite a while that General Motors was planning on rolling out a new top of the line premium luxury sedan that would serve as the pinnacle of American performance sedans. In the same way that the Dodge Challenger SRT Hellcat shook up the American performance world, the new Cadillac is expected to have the same impact on the American luxury sedan world. Little has been known shy of the fact that the new range topping Cadillac sedan would debut next January at the 2015 North American International Auto Show in Detroit.

The C6 Becomes Official
Yesterday it was announced that General Motors was moving the base of operations for the Cadillac brand from Detroit to the Soho District of New York City and today, the luxury automaker made an even bigger splash in the automotive media by announcing the name of the new top of the line Cadillac – the CT6.

"This Cadillac will be the lightest and most agile car in the class of top-level large luxury sedans," said Travis Hester, executive chief engineer, Cadillac CT6. "Using the lessons learned from our dynamic ATS and CTS product lines, we have developed an entirely new vehicle architecture for the CT6. It will employ a mixed material philosophy that combines the best and most efficient components optimized for each area of this new top-of-the-range car."

While the Cadillac CT6 will likely differ greatly in its basic design, but expect to see some of the design cues from the Elmiraj Concept (shown above) on the new range topping super sedan.

What is the Cadillac CT6?
Little is known about the new Cadillac CT6 outside of the name, the debut date next January and the fact that it will be rear wheel drive. We know that it will be the top of the line model and the largest car in the Cadillac lineup, so expect it to be slightly larger than the XTS and, of course, rear wheel drive based where the XTS is front wheel drive based. The CT6 will likely also come with all wheel drive, based on trends in the premium super luxury sedan segment, and we should expect to see literally every bit of high end interior technology from the entire Cadillac lineup in the CT6. In theory, the CT6 will have every imaginable luxury option that we see from competition including Lexus, Mercedes Benz, BMW and Audi – thus making it the most luxurious mainstream large sedan in the world.

We do know that the Cadillac CT6 will feature GM’s most advanced lightweight structural design so while it will be the largest sedan in the brand, we can expect it to still be surprisingly nimble and impressively efficient. More importantly to many luxury sedan buyers, the CT6 will also have an impressive drivetrain lineup that will allow it to compete with the top dogs from the European luxury brands. I would expect to see some variation of the Corvette Stingray’s LT1 V8 and perhaps the twin turbo V6 from the CTS V Sport – both of which I expect to see mated to the new 8-speed automatic transmission.

The New Naming Policy
The new Cadillac CT6 brings with it a new naming policy that will slow spread across the brand in the coming years. The “CT” is set to signify that it is a Cadillac car and this was picked based on the ongoing success of the CTS lineup. However, rather than a letter at the end, Cadillac will now use a number in the third spot and this number signifies that car’s place in the lineup. The CT6 is the top of the line, so other smaller Cadillac cars will have lower numbers. In theory, the future XTS could be the CT5, the CTS could become the CT4, the ATS sedan could be the CT3, the ATS Coupe could be the CT2 and the ELR could be the CT1. However, GM points out that the various vehicles will not get their new names until an entirely new model is introduced.
This also leaves some question as to what we can expect for the future name of the Cadillac SUVs, but we should find out more about the new naming direction in the coming months.