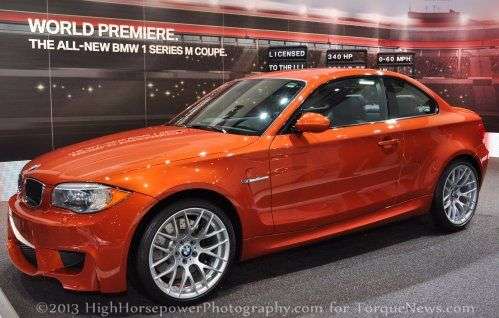 According to BMW M Division boss Dr. Friedrich Nitschke, the company is very likely to build a successor to the insanely popular and incredibly awesome BMW 1 Series M Coupe in the future – but we should not hold out hope for an all wheel drive version of the BMW M6 Gran Coupe that debuted earlier this year in Detroit.
Advertisement

When BMW first introduced the 1 Series M Coupe in 2010, the company only planned to build 2,700 examples of the awesome little 340 horsepower M Coupe. However, due to overwhelming popularity, the company ended up producing 6,331 examples of the 1M in Valencia Orange, Black Sapphire and Alpine White. At the time, BMW stated that the 1 Series M Coupe (also known as the 1M Coupe and the 1M) would be a one year ordeal but according to the folks at BMW Blog, Dr. Friedrich Nitschke has all but confirmed that there will be another high performance M version of the BMW 1 Series.

No other details are available but we can expect that the successor to the 1 Series M Coupe will be just as much fun as the compact coupe from 2012. What many might be surprised to hear is that the car that fills the slot vacated by the end of 1M Coupe production might be known by a totally different name. The BMW brand has been undergoing a shift in naming where, rather than having 2-door, 4-door and hatchback/wagon models all offered under the same basic model name (such as the 3 Series Sedan, 3 Series Coupe, 3 Series Wagon), the models with four doors will remain at the 3 Series while the 2-door coupes and convertibles are expected to soon become the BMW 4 Series. In the same fashion, the BMW 1 Series will eventually become all sedans or hatchbacks while the two door coupes and convertibles will become the new BMW 2 Series. BMW has gone so far as to trademark the BMW M2 name (in the summer of 2011) which only fed the rumors that the successor to the 1 Series M Coupe could be called the new BMW M2.

Regardless of what the successor to the BMW 1 Series M Coupe is called – our bet is that it will be a great little sports car.

The bad news for some prospective BMW M owners also comes from Dr. Friedrich Nitschke via BMW Blog. It turns out that unlike many vehicles which are offered in both rear wheel drive and xDrive (BMW’s name for their advanced all wheel drive system), the BMW M6 Gran Coupe that debuted in Detroit will only be offered in rear wheel drive form. There had been rumors and speculation that the M6 Gran Coupe (which is actually, technically a sedan) would receive the traction aiding benefits of the xDrive system but it appears as that will not be the case.

In the long run, the enthusiasm over the strong likelihood that there will be a new BMW 1 Series M Coupe/BMW M2 will overshadow any ill will towards the company for opting not to bring the M6 Gran Coupe out with all wheel drive. The only questions left to ask are when will the new M compact coupe arrive and what will it be called? With no official word, only time will tell but in the meantime – at least we know that the new 1M Coupe is probably headed to a BMW showroom near you.