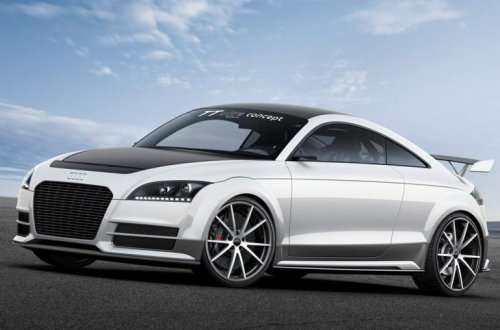 Audi has just pulled the virtual covers off of their new TT Ultra Quattro Concept – a lightweight, high performance coupe that will make its public debut at the upcoming 2013 Worthersee Festival in front of the biggest collection of Audi enthusiasts in the world.
Advertisement

While the new Audi TT Ultra Quattro Concept might look like nothing more than a gussied up version of the current TTS Coupe, this sleek sports car packs extensive engineering to make it significantly lighter than any other TT before through the use of advanced materials including magnesium, Carbon Fiber-Reinforced Polymer (CFRP) and Fiberglass-Reinforced Polymer (FRP). Best of all, once the engineering team was done cutting the curb weight of the TT Ultra Quattro Concept; they packed in a high performance engine to make this compact sports coupe perform like a modern supercar.

The Audi TT Ultra Quattro Concept begins on the outside, where lightweight, high strength Carbon Fiber-Reinforced Polymer has been used to construct the rear end of the body, the center “tunnel” that runs along the floor, the b pillars and the roof while magnesium flooring and hinges helps to further reduce weight without reducing structural rigidity. After removing some nonessential items, the modifications to the body and chassis of the TT Ultra Quattro Concept is 220 pounds lighter than a standard TT Coupe even with the added rear spoiler – which is made of milled aluminum and exposed carbon fiber.

In addition to the ultra lightweight construction, the Audi TT Ultra Quattro Concept packs a specially built and tuned version of the 2.0L TFSI turbocharged 4-cylinder engine. In normal production form, the turbo 2.0 from the TTS Coupe offers 265 horsepower and 258lb-ft of torque but in the new TT Ultra Concept – this mill packs 306 horsepower (310PS) and 295lb-ft of torque. In addition to increasing the power output, the special 2.0T in the TT Ultra Concept has unique engine components including the crankcase, the crankshaft, the balance shafts, the flywheel, the oiling system and various other items around the engine that are lighter than normal production units – making this engine 55 pounds lighter than the standard 2.0T.

The result of these impressive weight reduction methods are an Audi TT Ultra Quattro Concept that weighs just 2,449 pounds after shedding a whopping 661 pounds through the application of lightweight, high tech materials. With the help of the high performance 2.0L turbocharged engine, a 6-speed S tronic dual clutch transmission and the Audi Quattro intelligent all wheel drive system, this TT Concept can rip from a standstill to 62 miles per hour in just 4.2 seconds en route to a top speed of 173 miles per hour.

The new Audi TT Ultra Quattro Concept will make its grand debut at the 2013 Worthersee festival in Germany. While these items aren’t likely to be found on the normal production TT Coupe any time soon, this lightweight, high performance concept shows what could be used to improve the performance and the efficiency of the Audi lineup.