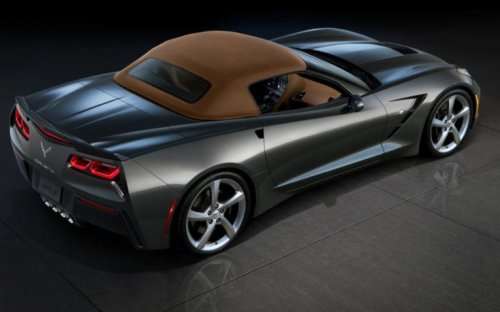 This weekend we got our first good look at the 2014 Chevrolet Corvette Stingray Convertible from the front and today we get three more shots of the new drop top C7 – this time showing us the car from a high rear angle along with a close up of the tonneau and the interior.
Advertisement

The first two new pictures of the 2014 Chevrolet Corvette Stingray Convertible show us the rear end from a high angle; one with the top down and one with the cloth covered folding hard top in the upright position. This gives us our best look at the new top while also providing a great look at the C7 form when it does not feature the fastback design of the new Stingray Coupe. As we thought when we got a hold of the front end shots this past weekend, the black Z51 package cooling vents are gone while the other aspects of the high performance handling package like the low profile molded rear spoiler, the high end braking system and the unique 5 spoke wheels remain.

Many convertibles look awkward when the top is up but in these pictures, it looks like the GM engineers did a great job designing a top for the 2014 Chevrolet Corvette Stingray Convertible with lines that look more like a coupe than a convertible with the top up. Along with that curvy roof that is finished here in a brown shade that matches the majority of the interior, this overhead shot gives us our best look yet at the revised rear end of the new Stingray. Keep in mind that with the design of the new C7 Corvette coupe, the fastback design essentially has the roof flowing almost all of the way to the back of the car. However, with no roof to take up that space, GM had to redesign the deck lid area. In the opinion of this humble car freak – I think that it looks great. The basic inward angled lines of the fastback have been retained in the form of new body lines and with the top down, the lines almost flow out of the interior.

Speaking of the interior, our first shot of the 2014 Chevrolet Corvette Stingray Convertible cockpit shows the same classy, upscale design that we saw in the coupe at the Detroit debut. Also, we get our first look at the great looking tonneau that hides away the folded up hard top during open air cruising. With many convertibles, the tonneau cover is something added out of basic need with a look that often leads us to believe that little imagination went into the appearance. However, much like pretty much every other aspect of the new C7 Corvette, the tonneau cover was clearly designed with both imagination and aerodynamics in mind. The sculpted lines of the tonneau work well with those on the rear decklid while the peaked areas behind each of the seats are finished in contrasting black – adding to the sporty look of the drop top Vette. Combined with the race seats, this intricate tonneau cover gives the Stingray Convertible a very modern supercar feel.

We can expect that the new 2014 Chevrolet Corvette Stingray Convertible debuting in Geneva will be mechanically identical to the new C7 Corvette Coupe but it will be interesting to see how much weight GM will have to add in the conversion from hard top to drop top. In most cases, a convertible will weigh at least a little more due to the extra chassis reinforcements needed when a unibody coupe loses the structural support of the roofline. Between those added reinforcements and the mechanical workings for the convertible top, there is likely to be some added weight but we will have to wait until the debut tomorrow for the full digs on the C7 Stingray Convertible.