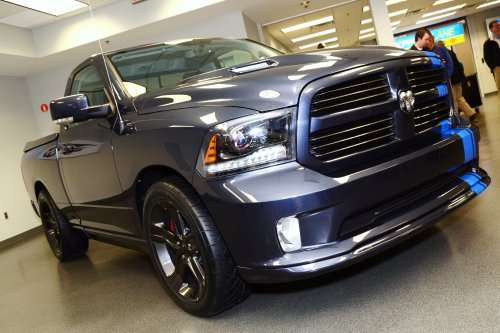 Among the Mopar artwork released last week was a shot of a 2013 Ram with a blue driver’s stripe that I speculated could be a hint as to the next Mopar branded vehicle but after seeing this sporty truck in person at the Mopar headquarters today – the black and blue ‘Urban Ram’ is more likely to be a hint to a future SRT pickup.
Advertisement

On the outside, the Mopar Urban Ram looks very much like a Ram 1500 that could be headed to the Mopar vehicle lineup with the offset light blue dual stripe but what wasn’t clear in the artwork was that this truck is a unique dark metallic blue named Modern Blue – not black like the Mopar 10, 11 and 12 – with a painted front sport bumper and a painted rear bumper with cutouts for the dual exhaust. The Mopar brand stripe runs the length of the truck with massive Mopar logos covering both bedsides in the same reflective blue as the stripes. Mopar then added their “power bulge” hood from the accessories catalog (similar to the hood on the Dodge Challenger), 22” black R/T style wheels, a hard tonneau cover and a body kit package that includes a more aggressive front fascia along with deeper side sills on the bed and cab. Add all of those modifications to the already aggressive design of the 2013 Ram 1500 and you have one mean looking sport truck…but Mopar didn’t stop there.

Under the hood of the Mopar Urban Ram is the 6.4L, 392 cubic inch Hemi V8 typically found in the SRT8 variants of the Challenger, Charger, Grand Cherokee and 300C. This Mopar crate motor offers 470 horsepower and 470lb-ft of torque out of the box but this particular SRT Hemi has been fitted with a set of Mopar headers, a Mopar cold air intake setup and a Mopar high performance dual exhaust system with massive polished chrome tips (no new power output was announced today). It has not been specified but I would expect that the Urban Ram packs the same 5-speed automatic transmission as the rest of the current lineup of vehicles powered by the 6.4L Hemi – with acceleration numbers right in the same area as the production SRT models. Finally, since you cant have a high performance truck that stops and handles as well as it rockets down the quarter mile, Mopar has added a performance handling package and an SRT brake package that includes 4 piston calipers clamping down on huge vented rotors.

There is no doubt that this is one awesome pickup truck but we have to wonder – is the Urban Ram our first look at the future Ram 1500 SRT8 or is this really nothing more than a great looking show truck that happens to feature an array of current factory production components from other SRT vehicles? SRT President Ralph Gilles has said in the past that there is indeed a market for a high performance pickup and this market is recognized by the folks in the Auburn Hills headquarters. Gilles closed that discussion with “if we build another SRT Ram – we are going to do it right this time.” That comment came after he had spoken somewhat negatively of the Ram SRT10 Quad Cab that was powered by a Viper V10 but came only with an automatic transmission that killed the performance capabilities of this high performance hauler. Should ‘doing it right’ entail shifting from an SRT10 to an SRT8, it would allow Chrysler to offer a price closer to the other current SRT products rather than being priced up towards the price of the mighty 2013 Viper. Should this build with the headers, intake and high flow exhaust system applied to the Urban Ram’s 6.4L Hemi – it could very well equal the 500 horsepower output of the long-discontinued SRT10 Ram.

As a truck owner who likes going fast, I love the idea of a new high performance pickup truck from Ram and the Street and Racing Technology group. An SRT Ram 1500 doesn’t need the Viper V10 and going with the Hemi would allow the company to keep the cost in the high 40s to low 50k range – while also being the only high performance pickup on the market today.

Check out the gallery on the right for a closer look at the Urban Ram headed to the 2012 SEMA Show and stay tuned to TorqueNews for all of your SEMA coverage!